Daughter, Maryalice, came up with her husband Brock to join us for our  Saturday morning adventure.
Nothing to shout about..but it was serious FUN and you meet the nicest people out there.
Actually we didn't do so bad... 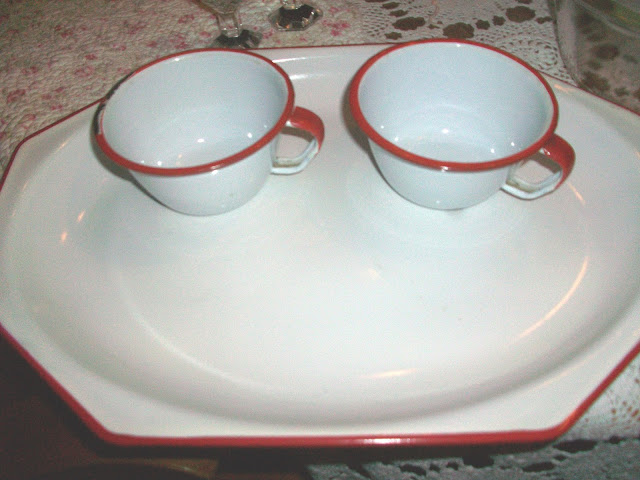 I have collected this enamel ware for some years now, but this is the first time I have ever run across a tray!  I was so pleased and there were two cups also..which now gives me a set of six.  For me it was a great find.  25 cents for each cup and 50  cents for the tray.  Believe me, they didn't look like this when I found them.  They were in a box with a bunch of junk.  The tray was in perfect condition!
I am careful that I don't overdo in collecting.  It can get crazy...:) 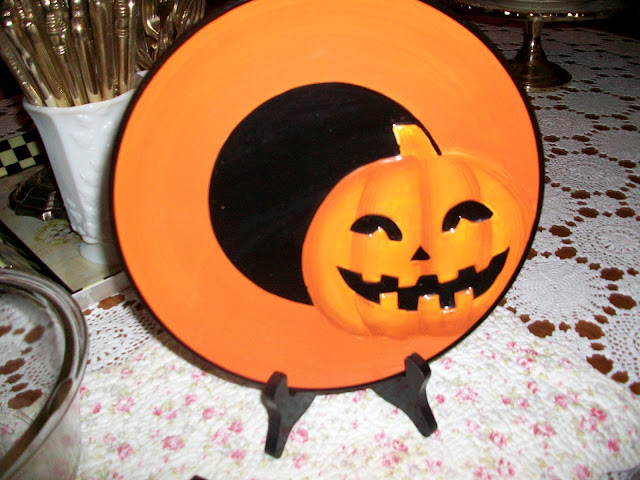 This plate with the raised smiling pumpkin on it..was one dollar..not a nick..not a scratch.
The black laquered stand I just happened to have in a drawer..  :) 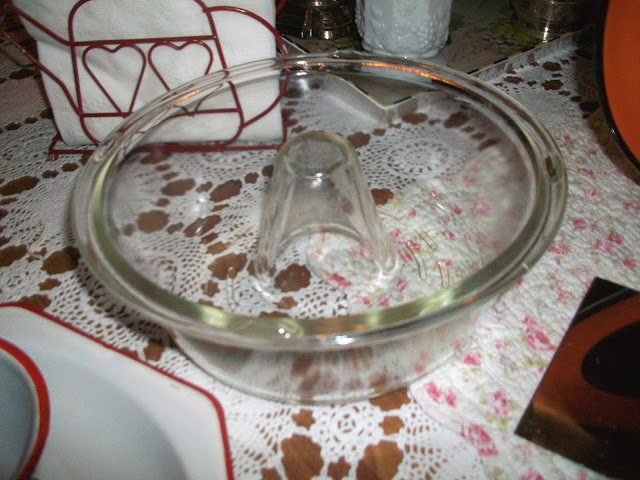 I loved this glass bundt cake dish.  It has little glass stands around the rim so the edge won't sit flat..
I don't know..I seldom bake but I HAVE to try this baking dish!  All it says on it is "glass ware"..
It was a dollar..but she took 50 cents.  :) 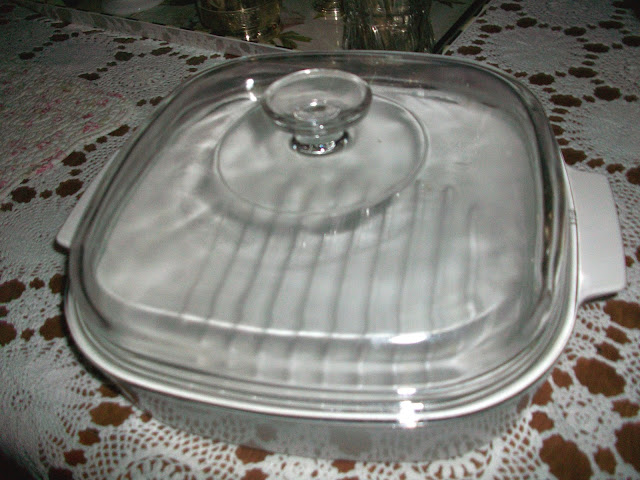 Would you just look at this great baking dish.   It was at a huge garage sale given buy several people.  There was this one and an another without the lid.  I picked the lidless one up and then decided to take the covered one.  Took it to PH to hold onto and then decided to take the other one as well..but when I turned around..it was GONE! :)  I snoozed..so I loozed!  :) 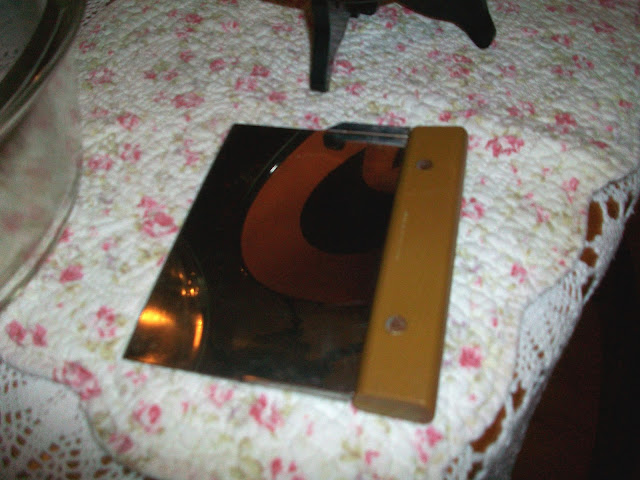 I have always wanted one of these.  Probably nearly every kitchen has one, except me.  And there it was!  I have used it every day since Saturday!
Then I found... 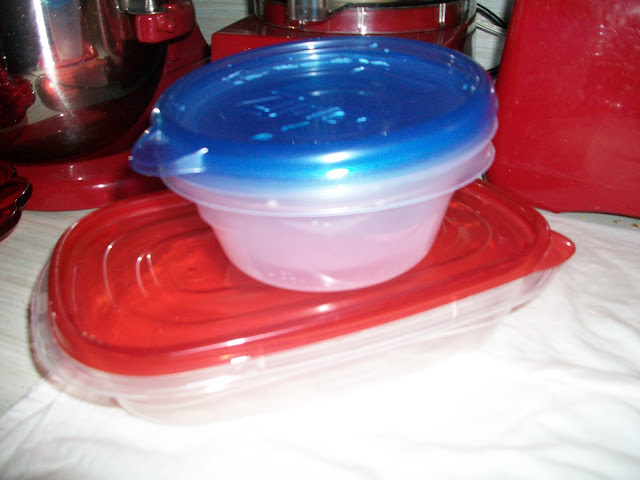 These brand new unused plastic storage containers..great for sending food home with the kids or taking something to my neighbor.
Also found in the bottom of a box... 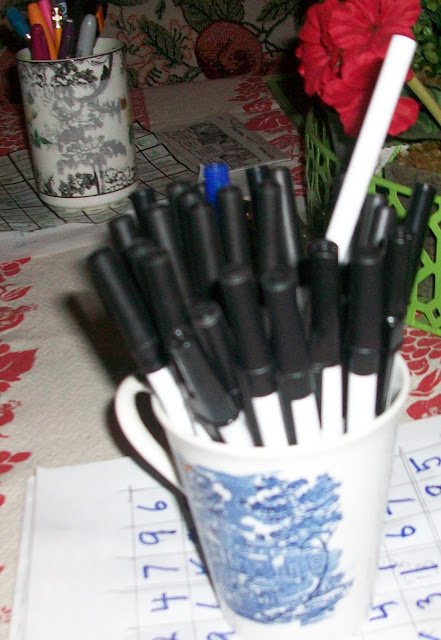 INK PENS!  All of them laying loose and scattered at the bottom of the box..and every single one of them worked.  I was doubtful but they were perfect.  As you can see, they were with PH's things..the man loves pens!
Also in the same box were.... 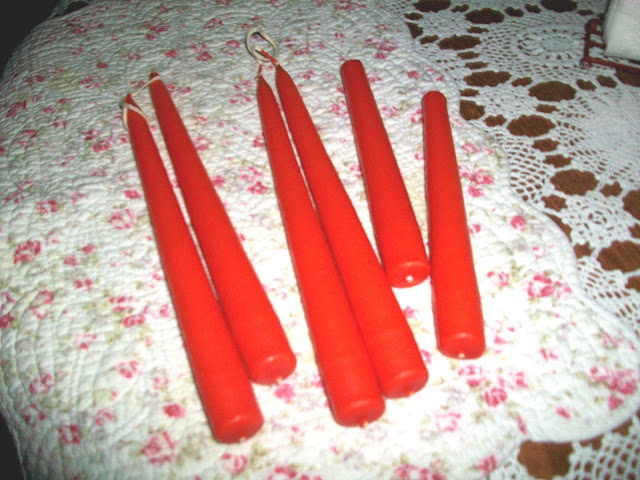 Two sets of orange candles and two that had been lit.  The flash makes them appear more of a Christmas red..but they really a lovely Fall orange.
Everything from the covered baking dish down cost $2.00  They were practically giving things away.
Actually, now that I think of it, it was a pretty darned good garage sale day after all!
The later it gets the better the prices.  I think folks get tired and just don't want to pack it all up again.
Daughter Maryalice...heaven knows what she got..all I know is that she went home pleased as punch!
Both of our husbands went with us...and then took us out for pancakes.
What a great weekend it was!
Love,
Mona
P.S.   ..and I didn't even think to take pictures of the lovely rose covered curtains I found for $5 ...NO idea what I will use them for...probably the guest room...for a nice change.  Tiny polka dots..in the background.  SO COTTAGE!  There were lots of valances, and a full length with tie backs.
OH..and a hammer.  I found the sweetest hammer for a quarter...It's little and perfectly balanced.  You should see it.  I think PH laid claim to that...:)  I already have a hand painted one...WITH a tassel on the end.
﻿
Posted by Wsprsweetly Of Cottages at 3:30 AM