~SHORT POSTS ARE GREAT TOO~

﻿ Sometimes short posts are great...like today.  So much going on, lots of chores to do..so many great blogs to visit..and of course dinner to cook...so....


p.s. Don't forget ..today is the last day to sign up for the October Birthday giveaway...look below!  I am also throwning is a little surprise for Halloween....
Posted by Wsprsweetly Of Cottages at 12:11 AM 22 comments:

﻿This morning I was catching up, or trying to, on some visiting...when I came across a post by Becky.  She addressed the issue of hoarding and I wanted to just tell you a story about that..before you begin tossing things out in a panic.

﻿
﻿
﻿
It takes nerves to do this...at least for me.  What to give...what to give...
Sweet Dawn at A COTTAGE STATE OF MIND  thought since we had birthdays within a week of one another..that this might be nice.  Dawn USED to be my friend!!!!    :) Of course I am teasing....
She is precious...but decisions make me crazy!

It is just a pair of vintage hand embroidered pillowcases with hand crocheted edging that I loved...and thought perhaps you would.  I bought them because I collect vintage linen.  These were bought from someone that deals in vintage linen that many of you may know.  I have never used them..they have been in tissue paper since I bought them.   I am parting with something I love because I am hoping if I like them..that someone else will.   They are so sweet for a guest room or for your own room.   I wanted to give something old and something new.  (...do NOT say a word!) :)

I also just bought this wonderful craft book from Gooseberry patch...and I KNOW full well that I will never even look at it...as I don't make things for my home anymore.  I let others do it.. :)
It will come to you in the original box it arrived in..and has never even been looked through.  Brand new.
And it is in time for Christmas...so if you craft you will have time to do so....
No requests.  You do not have to follow me...or do anything at all.  No requirements..other than to SHOUT MY PRAISES FROM THE ROOFTOPS!!!    LOL
Ok..enough of my silliness.  If you are interested...just make a comment...you can even be mean...and say it's dumb stuff....I wouldn't blame you.  :)
I have NO idea what anyone would like.
I am hoping they will appeal to someone out there.   Hey...you can even give them away..I won't mind. Just don't tell me ok??  :)
Love and hugs...
Mona

I have nothing.  Nope nothing at all.  But, Dawn at A Cottage State Of Mind and I are having birthday GIVAWAYS.   However...I have NO idea what I want to give as my very FIRST giveaway.  So..I will announce it by Friday.  I promise.  Just can't make a decision.  (Libra?  Ya think???)

It's early for Halloween and I am just fidgeting to get out there and dig through my October things.  I really am tempted you know.  Yes...I am....  I keep watching for someone else ...to..sort of break the ice and do it!  I did find one...and it was just adorable..but I will wait another week..(maybe!)

Ok..so..I RAN into the AC out by the garage this morning.  Not that you are interested in such a stupid thing..
I was fighting those blankity blank ANTS and was spraying away...and BLAM!  I literally saw stars!  First thought??  "THAT'S WHAT HAPPENS WHEN YOU GO AROUND KILLING THOSE LITTLE ANTS!"   Now I have this huge goose egg on the left side of my sweet little forehead.  What an owie that was!
So I went back into the house, looked in the mirror...debated on whether to cry or not to cry...decided on a chocolate chip cookie and some hot coffee instead!
I 'm feeling much better now!
Isn't Chocolate just AMAZING???   :)
Love and hugs,
Mona
Posted by Wsprsweetly Of Cottages at 1:30 PM 18 comments:

﻿﻿When we used to take trips to my mothers home with the children are packed into our VW van and it drove us crazy when they would ask over and over "Are we there yet?!  It was a two hour drive with seven little ones..and one time Pat said "Mikie, if you ask me that one more time, you will get out and walk!"  In a matter of moments Mike forgot.  "Are we there yet, Mom?" he called out..and Pat suddenly swung to the side of the road, stopped the car and said "OUT!"  Not a sound was heard.  Nothing.  Just cars swishing by on the highway!  My poor little boy!  He was just so eager to see Grandma.
Now..here I am...now it's me saying it.
Are we there yet???  Fall, I mean?  So...are we? :)  Am I starting my second childhood?

Posted by Wsprsweetly Of Cottages at 10:17 PM 20 comments:

~JUST ONE OF THE FALLIN' WOMEN OUT THERE..~

I will be gone and not blogging tomorrow..but I wanted to begin by saying that I REMEMBER.  We all do.
It was by best friend's birthday.  She and her husband were still sleeping in the guest room.  She and her husband and  myself and my husband have been  for the past 50 some odd years.  My husband was no longer with us as he was the first of the four of us to die.
She turned 65 that day.  A phone call came in from another dear friend of mine and when I answered the phone..she just said...turn on your television.  She was almost screaming.  I did...and the nightmare began to unfold.  The first plane had just hit.  I asked her if it was some sort of horror movie..she said..."NO, it's real!  It's happening right now!"  I yelled for my friends and they came running in and piled on the bed beside me.....and we watched...horrified.  Then we saw it coming through the air, the second plane.  I remember I screamed..and it hit!!   All of us were crying!   I will be horrified to the end of my days when I think of September 11, 2001.
My poor friend, every birthday for the rest of her life will be a bit marred by History.  It will always sadden us, but it is nothing compared to the lives it changed forever....with the world watching!

Love and hugs to all of you sweet, wonderful people out there,
Mona
Posted by Wsprsweetly Of Cottages at 8:05 PM 15 comments: 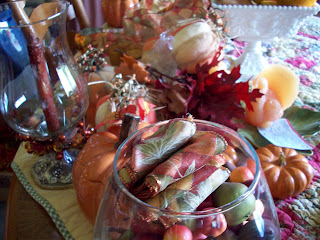 Ok..I am going to take the plunge here.  I have struggled to figure this out for the past couple of days..and just kept messing it up...not to mention losing MY FAVORITE BLOGS!  I am still working on that and figured it out.  Just printed out the list..and then all I have to do is COPY EVERY BLASTED ONE OF THEM!!!!     (wow..I feel better now)  Did you know you could SHOUT on here.  Yep!  :) 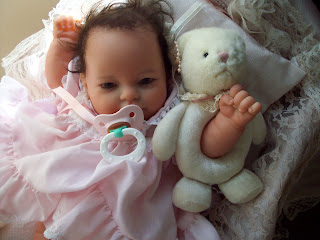 I don't really play with dolls.  Not really.  I like to  decorate with them..and I don't think I ever really got over  loving baby clothes.  That's all it is.  Anyway, I recently bought a lovely set of doll bedding for a pretty little cradle I found in a second hand store. 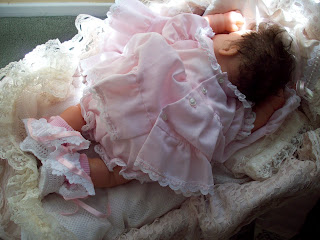 The cradle fits this little doll exactly..so it was the one I chose to go with this bed.  She is vinyl and the little Grands can play with her...and no problem at all. Dolls.  I think I am still trying to replace the toys and dolls I lost as a child.  I suppose that is part of it. 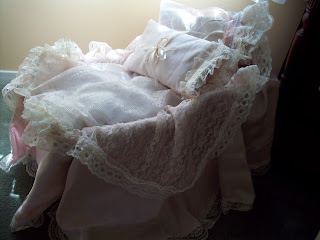 The bedding came in several layers.  The material is lovely..lots of lace and the color is the softest pinks.
The mattress has a lace cover on it..very soft and fits this little cradle perfectly.  Love it. 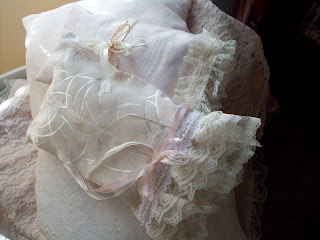 See?  Such pretty material.  Layers of ruffles.  It's probably the sort of thing I can make myself, and am just too blasted lazy to do it.  And, besides, I have a couple of little granddaughters that will love it in a couple of years.   Honest.  No, honest, I plan to give it to one of them.  As a matter of fact I have several dolls that I will give them.  :) 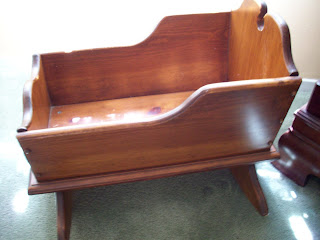 Isn't this the sweetest little cradle.  And, even if dolls and cradles and doll clothes aren't your thing...I doubt there are many women out there that don't at least like to look at them.  As I said, I like decorating a bit with them. 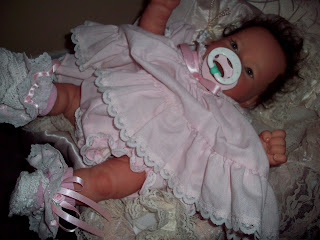 I never gave my babies one of those things,  and here I am sticking one in the dolls mouth.
Have I named her.  Sure.  I call her "Pickle Poo"...yep.  I do!  LOL  LOL
This is a terrible post...but hey..by the way, am I the only one having a terrible time with this new..posting feature.  The writing starts in the middle...anyway.  What on earth has happened?
My computer has been acting up...freezes and looks foggy.  Who knows.  This one isn't all that old...so..
We actually went out to garage sales this morning.  My sweet friend who was here to visit for a couple of days went with us.  I will let you see my finds tomorrow.  I didn't hit any jackpots..but it was really lots of fun.
Love and hugs..
Mona
p.s. did you notice that I hadn't figured out the "alignment thing" but I am not going to do it all over.
p.p.s...  About playing with dolls.  I lied.  I do love to play with them, if you can call dressing them..and talking to them..and giving them an occassional hug... :)  Nuts?  Probably...  Now you know why I had so many babies...one..and I was hooked!!
Posted by Wsprsweetly Of Cottages at 8:43 PM 24 comments: