Last Saturday I bought several books at garage sales.  One was a book that probably many of you have read or if you haven't, you've seen the movie or at least heard of it.
By Sunday evening I had finished it.
I cried several times while reading it..for several reasons... 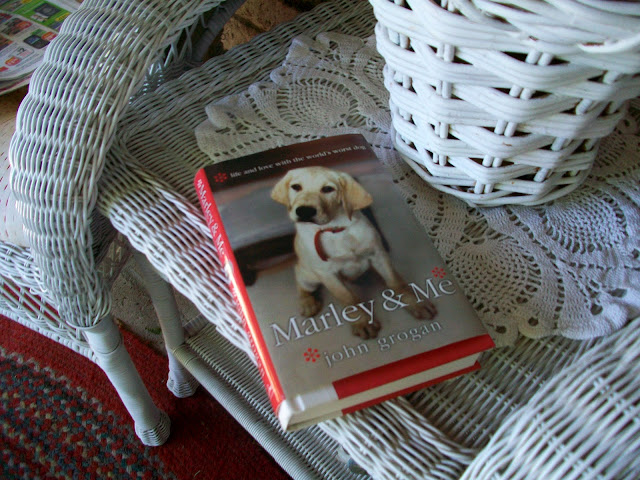 First because I love animals so much.  Would have many more if I could, and partly because I am probably in a very emotional time of my life.  Marley and Me was a touching book and I was amazed at the patience of the young couple who bought a little puppy that brought them so much grief, but joy as well.  They struggled to understand their dog and went to great lengths to fix whatever was causing their beloved pet to be so difficult.
Just raising a puppy, kitten or any pet can be a daunting task but Marley was a HUGE undertaking.
I have had dogs AND cats as a part of our household as long as I can remember.   My children slept with our dogs at their feet just as I did as a child.  Some may disapprove and that's alright.  This was just our way.  Not everyone's.
Mele still and always will sleep at my feet.

The beautiful little white Pom I owned for years before Mele, was  "kennel trained" because the book said that is what Poms wanted.  Winnie HATED it from the very first day but she was locked into it each night.
I have to wonder now WHY I continued with it when she so plainly hated it.
I used to say it was because of Earthquakes and if one occurred, I would be able to find her quickly.
Now I am sorry.  So sorry.
She was in her kennel one evening in the other room.  She became very ill from something (we never found out what she ate) and to make a long sad story short, she died.  She was ill all night long and we slept right through it.  She died at the Vet's two days later.
NO more kennels for me.
When I finished the book Marley and Me the following night, realization suddenly hit me..that once again I was going to lose someone I loved.  My Mele.  Mele was a Christmas gift to me from my husband six months after Winnie died.  I think of Mele as young but she is now nine years old and beginning to show her age.  She is slowing down..doesn't romp as often and after a few barks, quickly lets guests alone.  I used to have to put her into the bedroom for a short period until she could get a grip on her joy at having company, someone new to smell and greet.  No more.  She takes it all in stride.  Greets with a wagging tail..recieves a pat and is gone.
I looked down as I munched my morning toast and drank my coffee loaded with creamer, and there she was...patiently waiting for her treat of toast this morning.  So I snapped her picture. 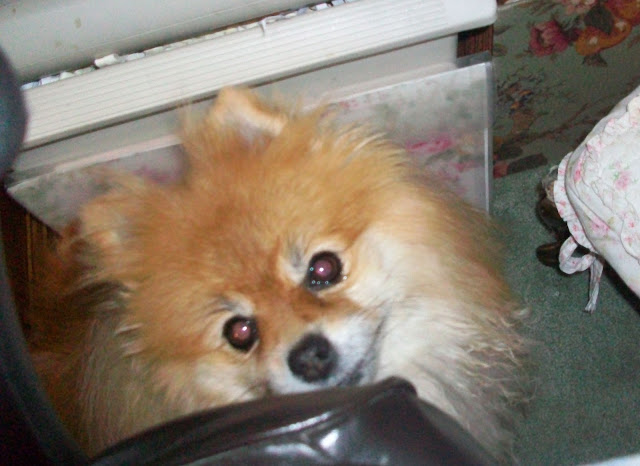 Day or night, she is never far from my side.
Several weeks ago I had a terrible scare.  Mele suddenly became terribly ill.  Her tail hung down and she shook terribly.  I quickly called my Vet to find his office was not open on Friday's and his help said I would have to take Mele to the Vet Emergency Hospital.  Nope, I had lost two pets there and though it  was not their fault..I just couldn't.
I called my son in law, Jim, and he gave me a Vet's name close to them that he knew.  I called and yes they would take her.  Come right in. We jumped in the car and headed out.
TRAFFIC!  After work traffic.  We were stuck!  It was late and the office was near closing.  I called son in law back for the Vet's number...he said he would call them and say we were on our way.

Finally we arrived and rushed inside.  They were waiting for us..and in a short few minutes they took Mele from me...
Here what happened next.
A few minutes later the door opened and in walked my son in law AND my daughter Erin.  He had picked her up at work (she is a high school counselor and school had just let out) and they came straight to the Vet's office.  When I looked up and saw her I burst into fresh tears.  She sat and hugged me.  I was not expecting them to come and when I had calmed a bit she went off to the bakery my son and his wife own for some hot tea and when she returned she had my daughter in law, Cheryl in tow and not only tea but a big container of rice pudding from the bakery!  It's my favorite next to the chocolate bread pudding.  More tears, but this time tears of happiness that they were all there..
I was not alone.
There we all sat..sweet Patient Husband, me, daughter Erin, Jim, my son in law and Cheryl my daughter in law that owns the little bakery.  All for one little dog who is very loved.

Since losing our Sandy, we are all gathering at the slightest hint of hurt.  We were close in the first place but it's different now.  The impossible has happened...the absolutely impossible!
The concern on their faces suddenly made me realize...I HAVE to be careful where all of them are concerned.  One sniffle from me ..and they are on the alert.
I do NOT want them to worry.  They have been through a lot.  No more.
They watch me carefully.

Mele is fine.  She has some problems but she has taken her medications and is doing well.
She has a condition that is common to all Poms... a collapsing esophagus, plus her pancreas had something wrong with it.

I know full well what is ahead of me where Mele is concerned and I dread it.  I hope she lives many more years and she will get all the care I can give her.

Family and pets.  What a great thing to have. 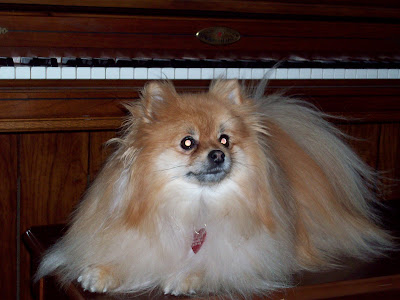 Posted by Wsprsweetly Of Cottages at 11:47 PM