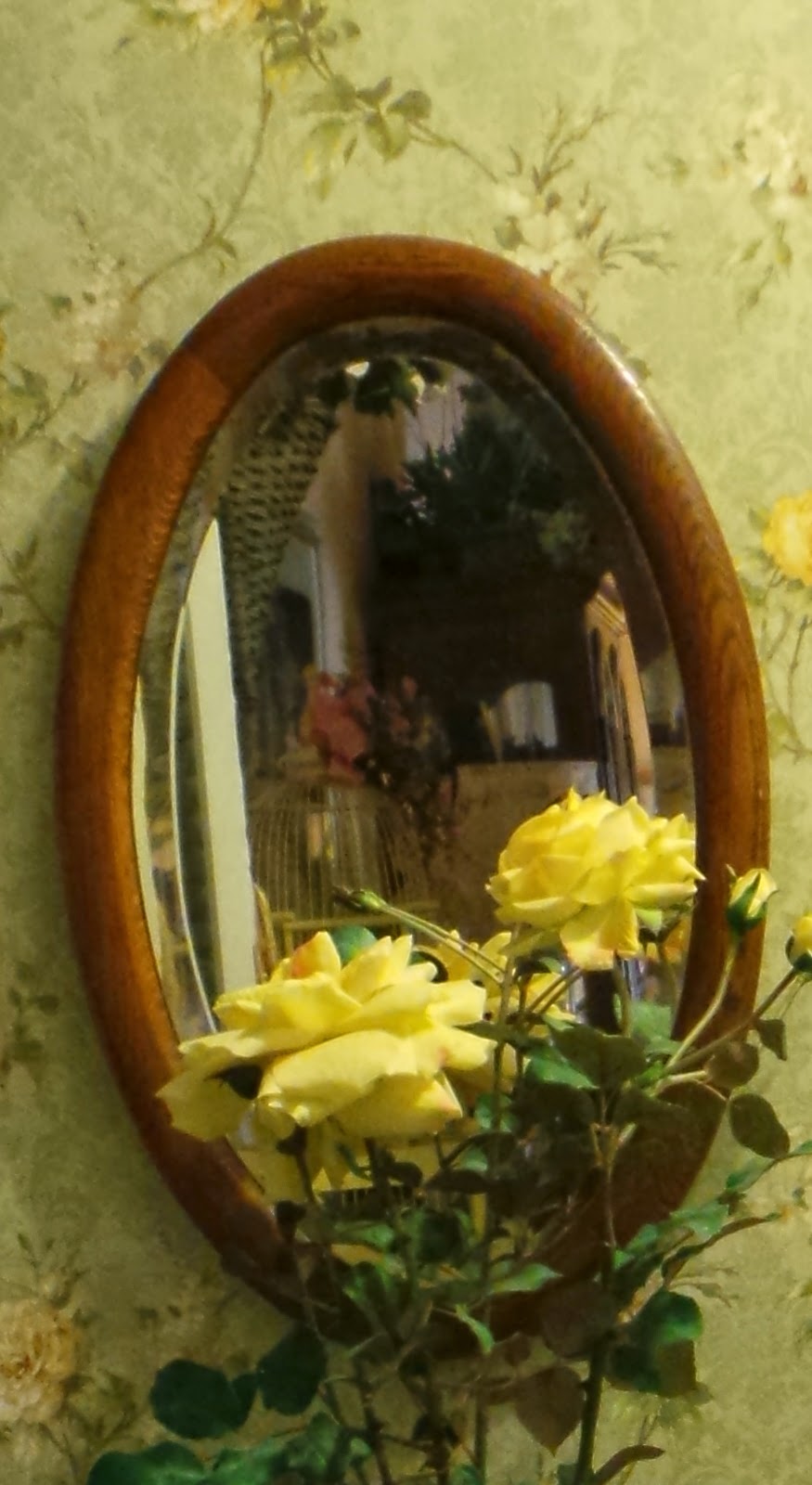 This is the mirror that some of you have asked about.
The one I spoke of as being "haunted"...
I don't know where it came from..other than it was acquired by my two sons when they first left home and moved into an apartment together.  I believe someone gave it to them..but neither of them can remember where it came from.  Of course they were just in their late teens when it came into their possession.
It was painted a pale green..and my son, Mike, stripped it and sanded it and finished the wood to the beautiful sheen it is today.

When the wallpaper was hung last week..I dug it out from the closet..in the guest room and put it back on the wall.
Due to certain circumstances...happenings concerning the mirror..I had removed it from the wall and put it under the bed in the guest room..then felt bad (for some odd reason) and pulled it out and put it in the closet.
It has always been a favorite of mine.  I believe the two oldest boys were 18 and 19 when I got it from them.
They are now 59 and almost 58 years old.

Sometimes you think you want to hear a story about something..but when you hear it..you find you really do not.
Ask anyone who has seen flying saucers and told of it.  You KNOW full well what happens to them.
I have even had a witness to the strange happenings with this mirror...not a family member.  I don't even speak of this in my own family.
My fear?
That I will be ruined in blogland forever..and someone out there will attached some sort of "evil" to it and thus to me.  Of course I'm scared.
But I want answers..and there apparently aren't any.

I've thought of getting rid of it..but...I still love that mirror and even I, do not want to believe what I've seen.

.  The back is solid wood..and it is obviously very old.  Naturally it has a history..but what...no one knows.

Briefly...different things have happened IN the mirror...I've even sent photo's to those two people...but that was foolish too..because it all could have been thought to be contrived...it wasn't, but it could have been.
And of course there is debunking from my family members.    It's reflections...it's this and it's that.
Reflections..?
Good thought.  That theory was tested.

Now it is back on the wall.
Let me think on this.  After all..it IS a good Halloween story..and..I could tell my story as fiction, just a sort of fictious ghost story?  As I said..I have to think about all of this..
:)

P.S.   I have inadvertantly hurt feeling over what I wrote so I have deleted those few lines.  May I say once more that no one I've shared this story with has been anything but kind.   Only my own worry about sharing the incidents with the mirror made me regret sharing the story.   I have also written a personal letter of apology above.
Posted by Wsprsweetly Of Cottages at 8:25 PM