~JUDGE NOT....THERE ARE WORSE THINGS THAN BEING A "DISH" ADDICT~

...isn't there???
We were suppose to get up at 7:00 this morning and head out to an Estate Sale! For the first time I had done something I always mean to do.  I made a list.
I am NOT the most organized  person and I often  "plan" to do certain thngs and then seldom follow through.
A trait I hate to see in others!
Isn't that the way of it usually though? :) 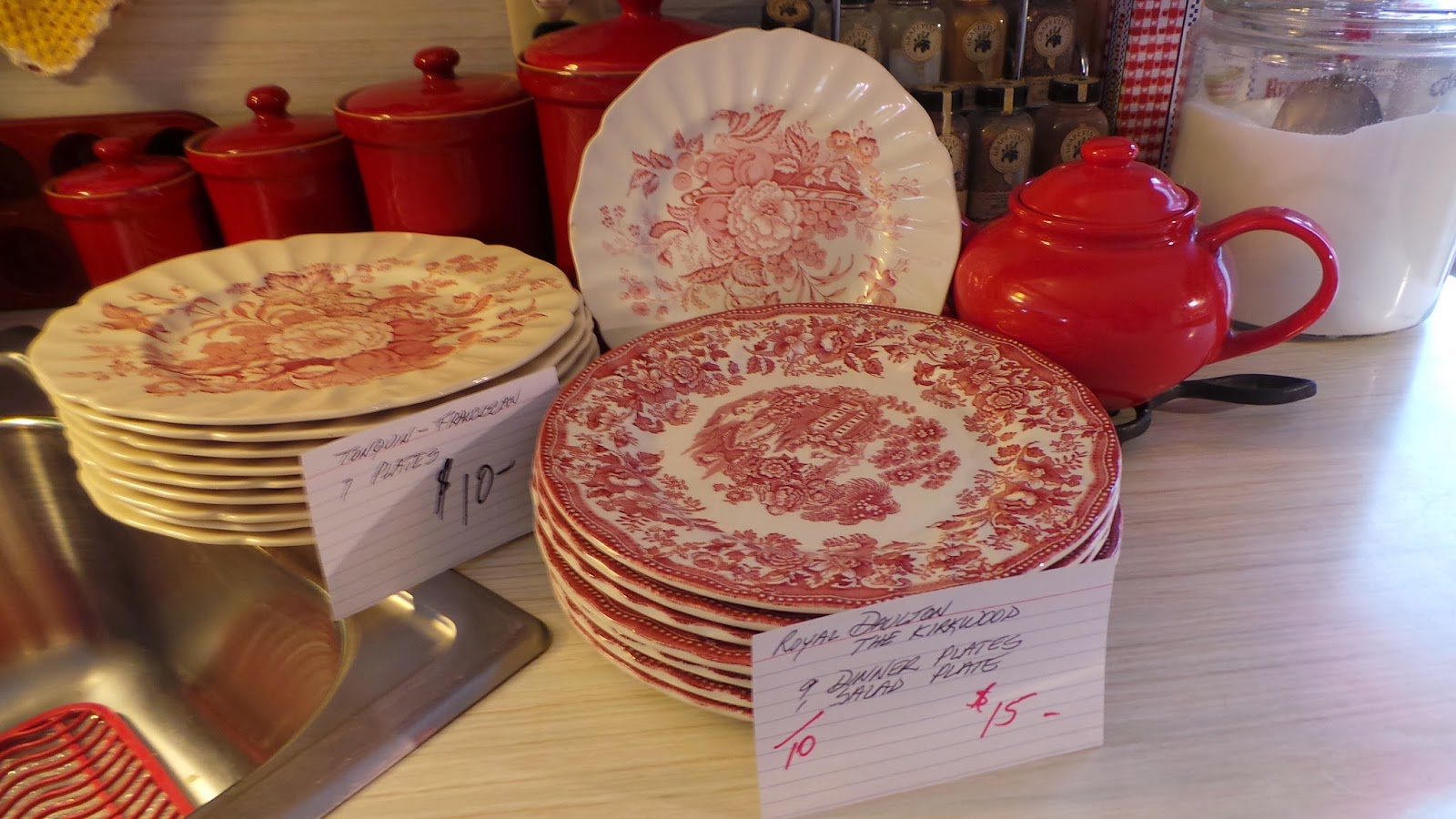 The red on white set is Kirkwood by Royal Dalton
Made in England
I had taken my little notebook and looked at the photo's posted of the sale..and made a list and studied it as to what I wanted to check out first when I arrived.
I was going to do this right this time.
First and foremost was THE dishes.  In one of the photo's I could see a very tall stack of dishes and the red caught my eye.
They were all in one stack so it was difficult to see what they really were and the photo was taken from a distance. 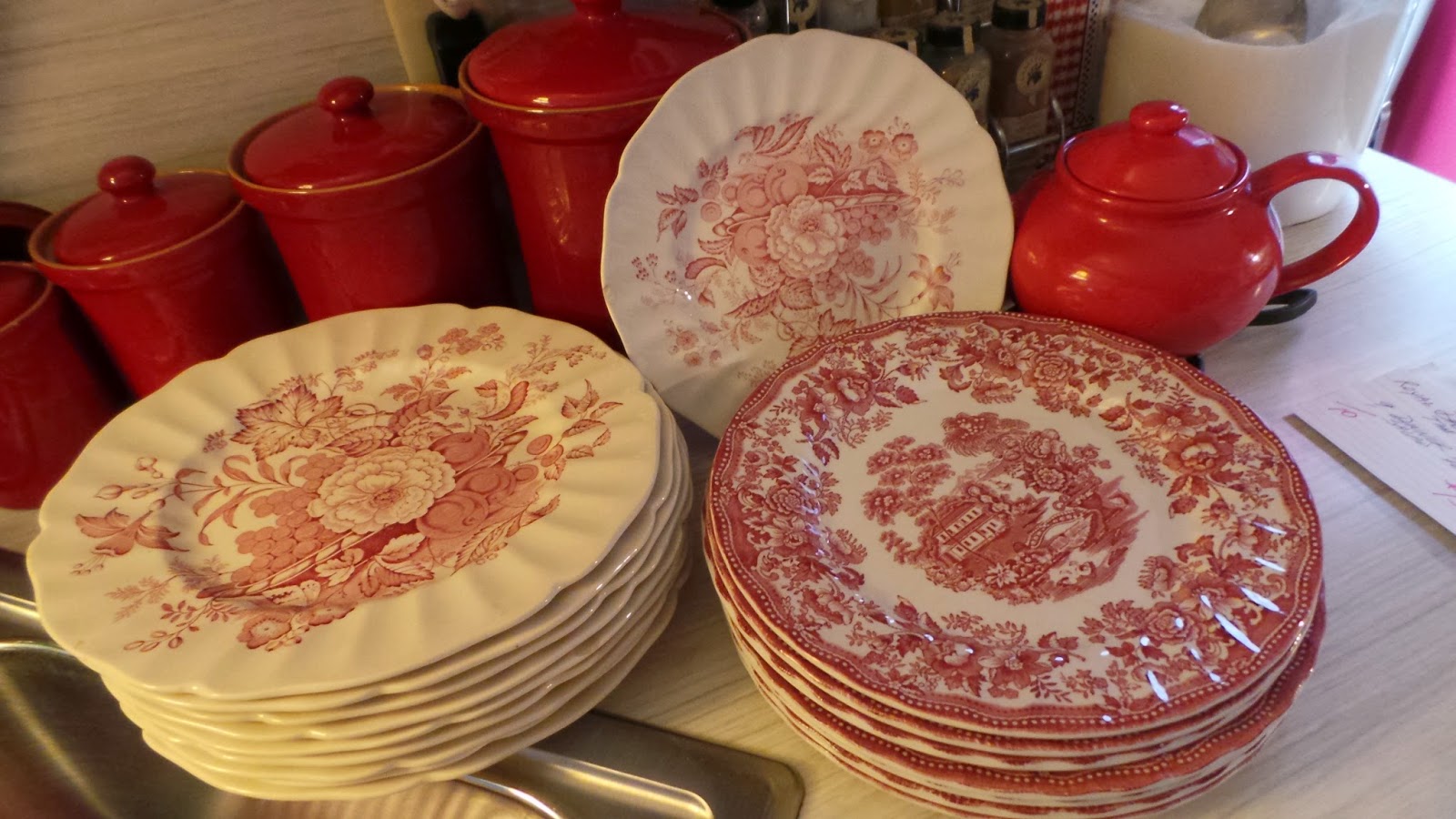 They were perfect!  ALL of them came home with me. 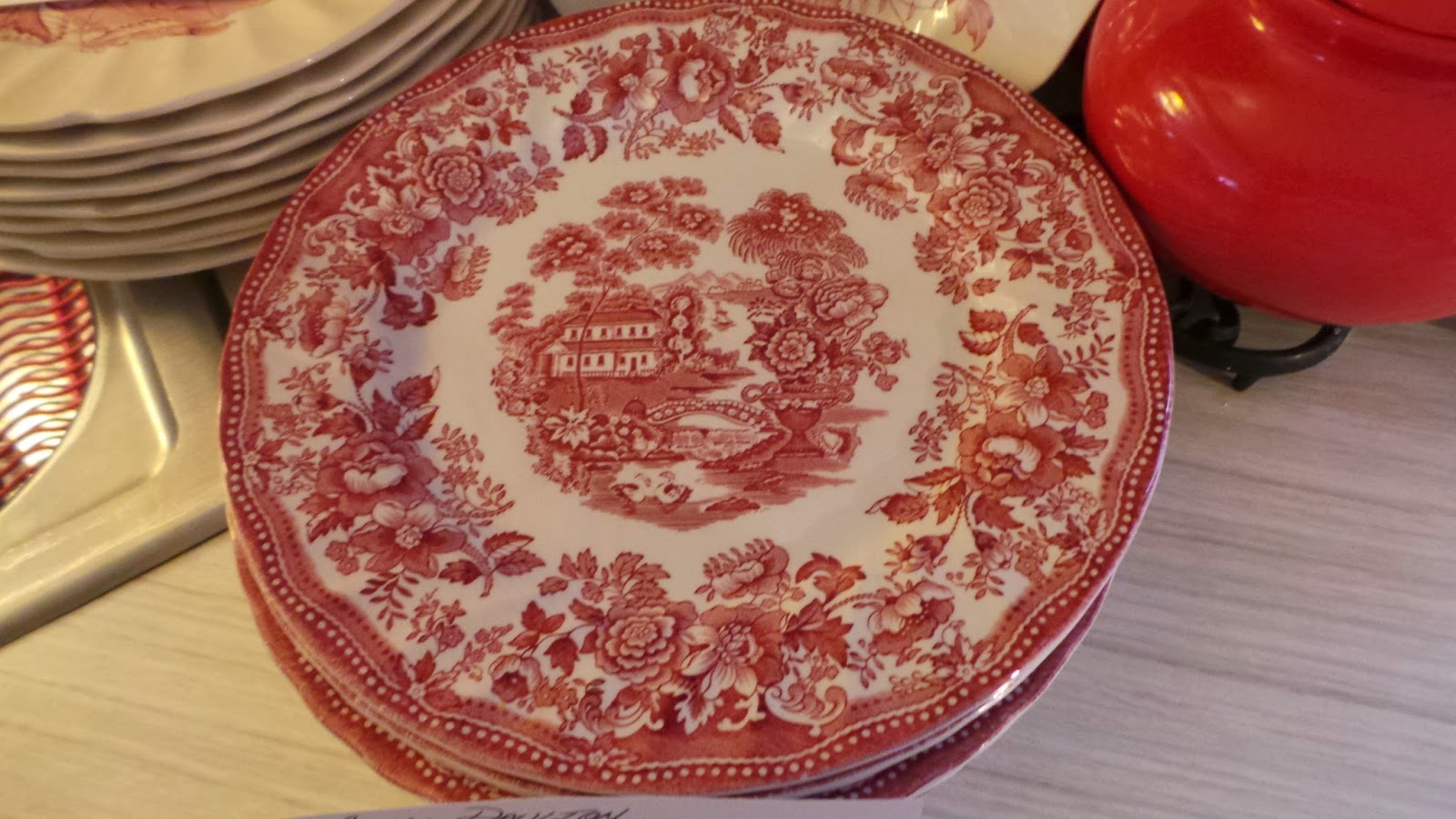 The red plates are Tonquin by Franiscan
Made in Stafordshire England.
I was in heaven!! 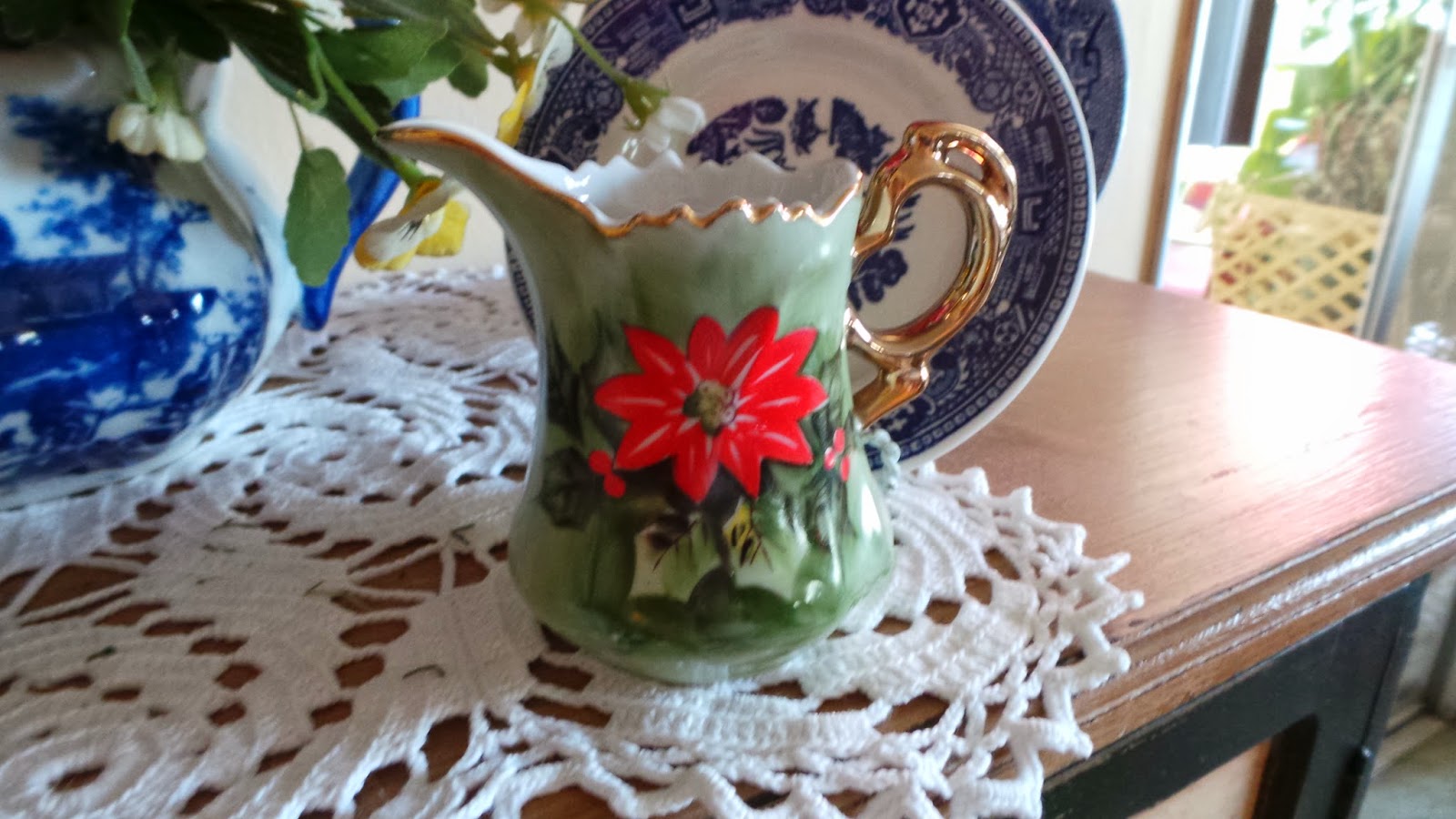 This little pitcher caught my eye..it's much prettier in person.
It's gorgeous.  I mean, Christmas IS coming you know! :) 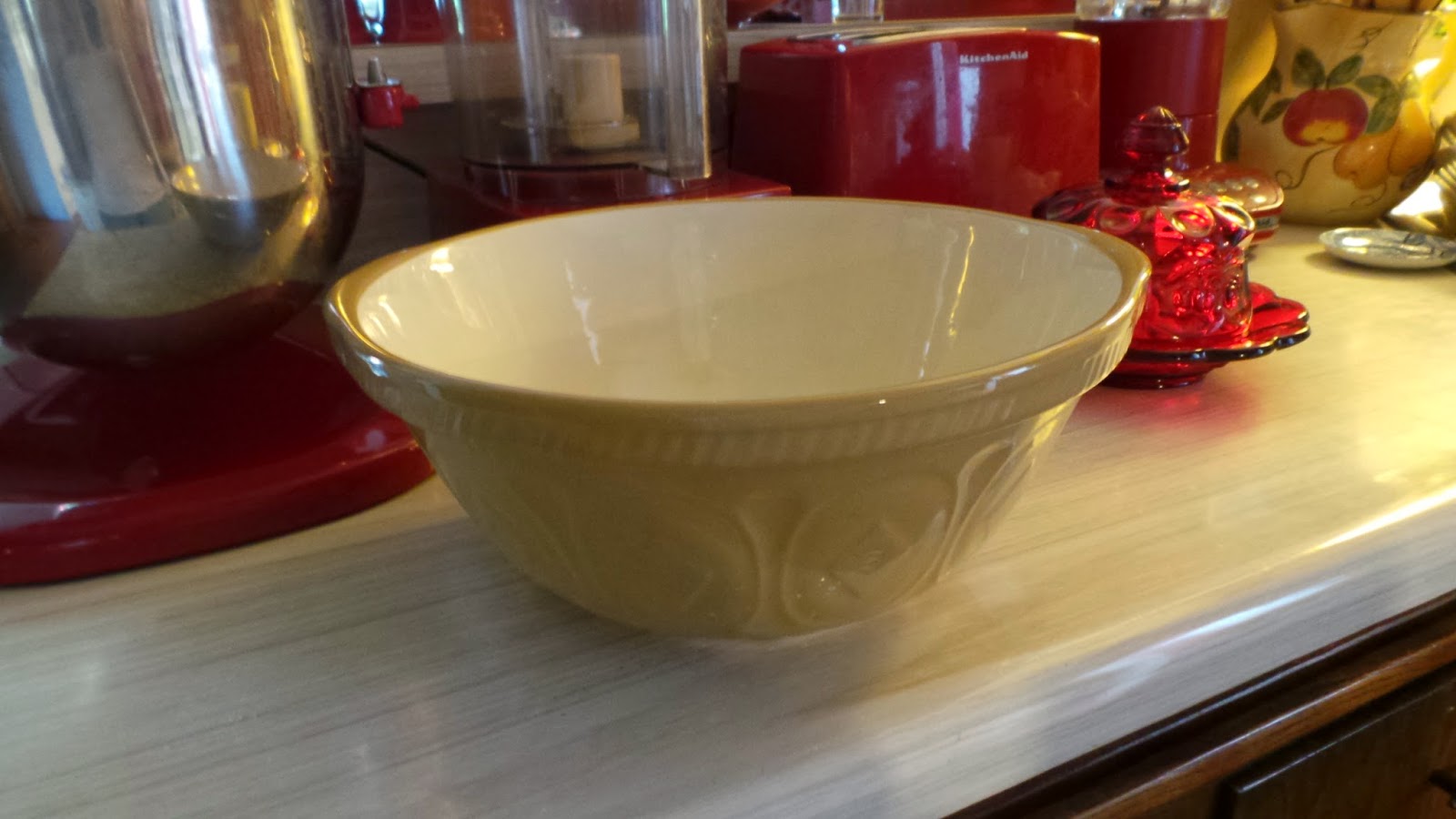 This lovely large bowl is interesting.  It says "GRIPSTAND"
on the back, has a picture of a building with T.G.Green Ltd.
Made in England on the bottom.
I like the little handles that help you grip the bowl.   It was $7.00.
There was another bowl..which was $8.00.  I took a picture but it didn't turn out so I didn't post it.
But..it was the largest of that old Pyrex bowl set from the 1950's. I'm sure you all have seen them.
I bought it because it was in mint condition.  Not a scratch.  It was just a bit smaller than the Gripstand bowl. 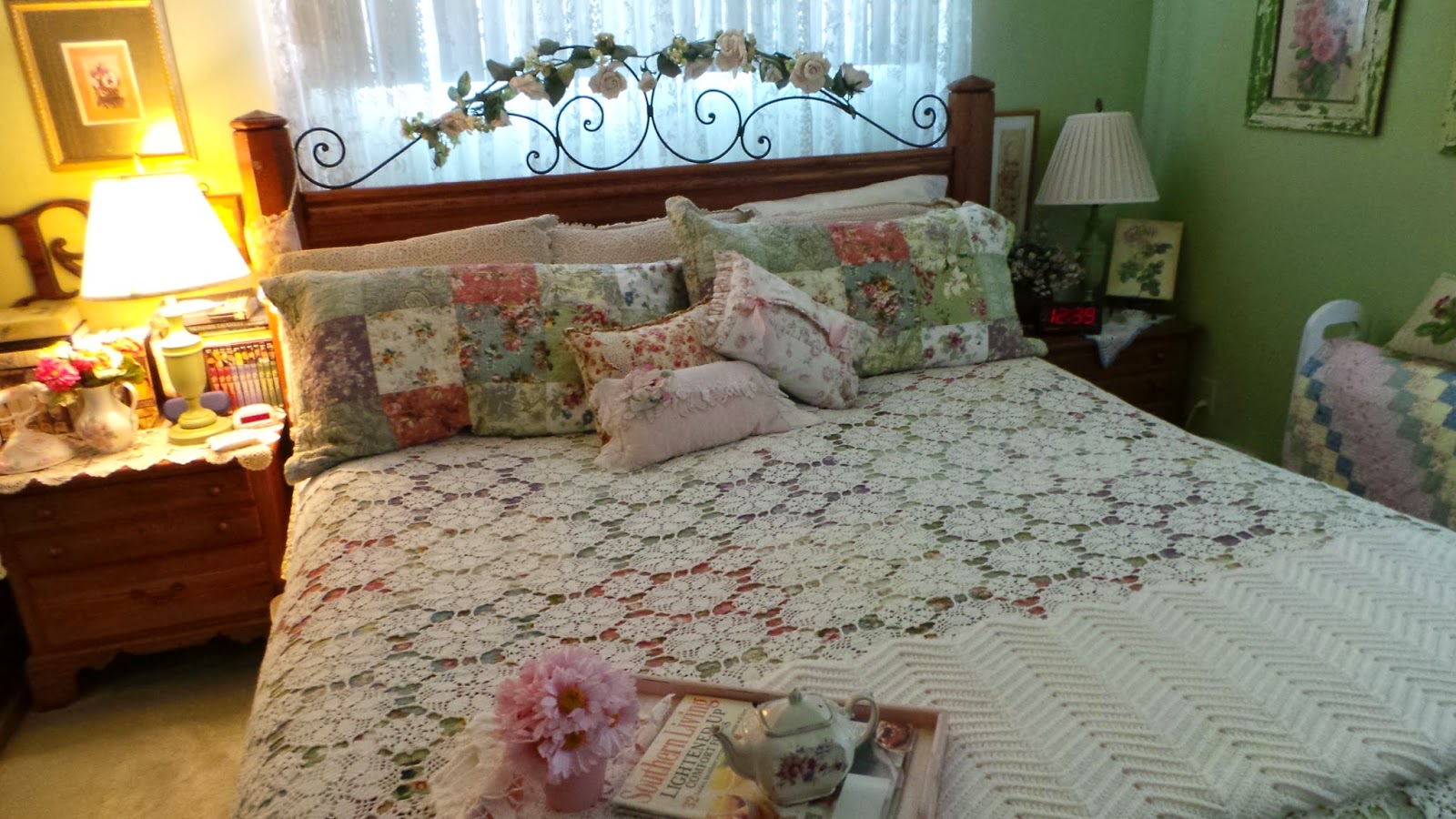 And this!  Well...this was the next thing I found which was not in the photo's.
I have a California King bed and this lovely hand crocheted spread fit it beautifully.
It would be way to large for a table..OR it could fall to just above the floor on all sides.
So..it was perfect for my bed.
PH frowned.  Hmmmm wonder why...but I knew.
He would have to pull it back to take his afternoon nap.  :)
(I did it for him!) 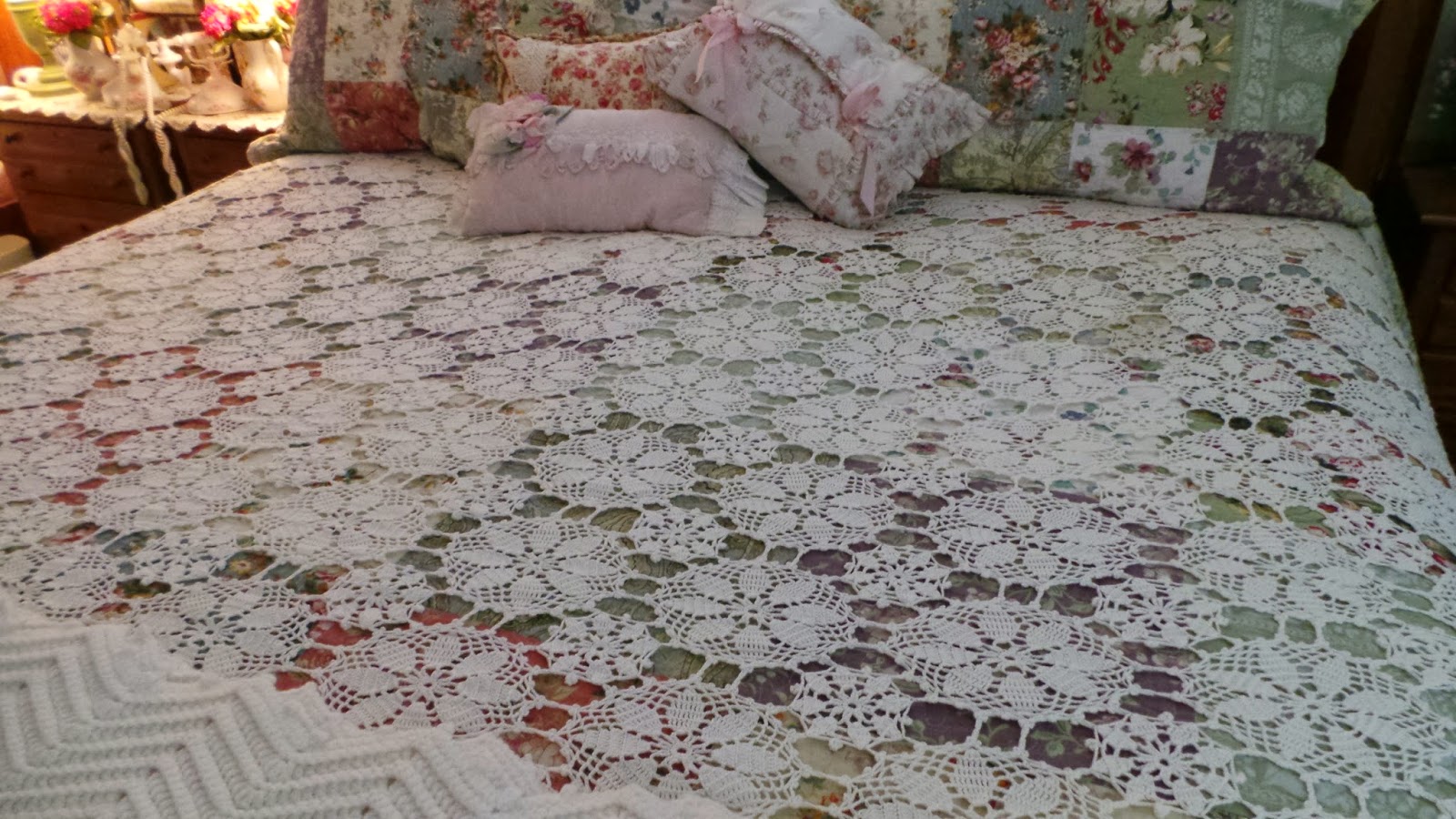 It doesn't take a lot to impress me..but I was in heaven when I found this.
Estate sales are never the least expensive..but this huge coverlet was well worth the $40.00 I paid...and more.
I cannot even imagine how long it took them to make this.  I believe the lady had made it herself.
There was more to look at but PH had nothing to occupy him..so I was sort of rushing.
Plus he was hungry.
I was so grateful for him taking me that I made him big thick slices of french toast and scrambled eggs.
Happy wife.
Happy life!

*footnote*
Not a word from the seller of the set of my ROSE CHINTZ.  Nothing.  I wrote a note asking if they had been shipped.  No reply.
*sweating it here!*

I do have the pretty ones above..but you and I both know they will go to daughters. :)
Posted by Wsprsweetly Of Cottages at 5:53 PM