HE speaks to us every day...so why don't we listen?

When I'm supposed to be sleeping is when I think of things I want to do.  I've even been tempted to get up and go turn on the outside lights and do things in the middle of the night..in my pj's...and it's just plain silly!
So..last night..or rather at 4 this morning, I began to think what I could do with that little Fairy House I love......
I've been putting this off until tomorrow ..for ages.. 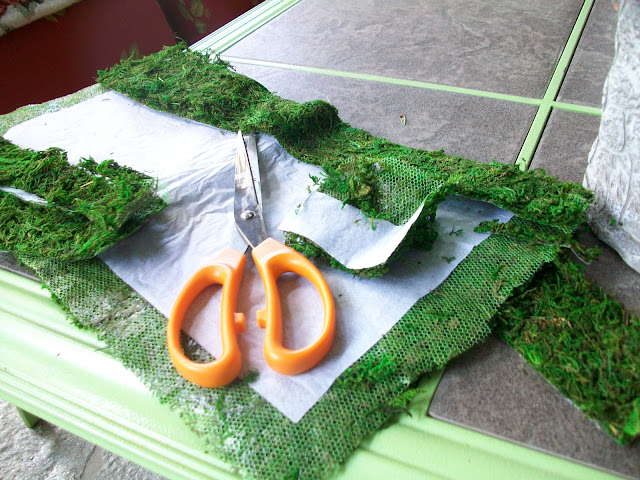 I bought some sheet moss... 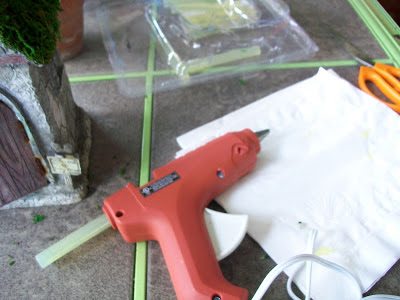 ..so this morning I got out the glue gun..and scissors..and the sheet moss I bought. 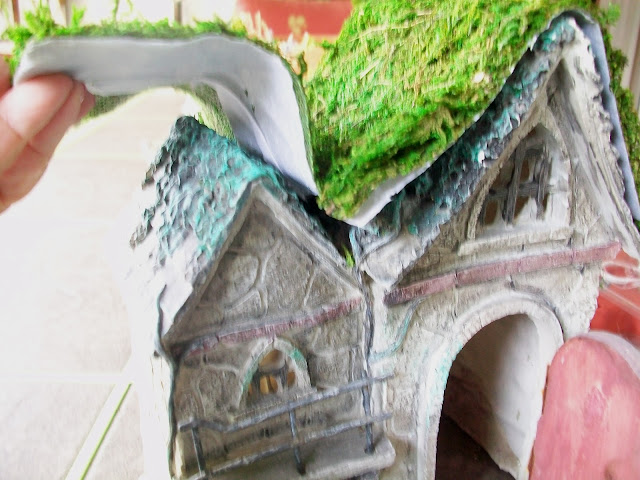 I laid it on the little roof and cut the moss to fit..then hot glued it down. 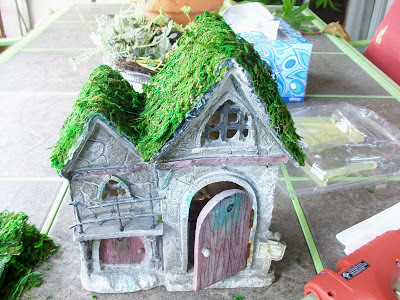 MUCH better!  Now to touch up the trim..add some tiny vines...maybe tomorrow 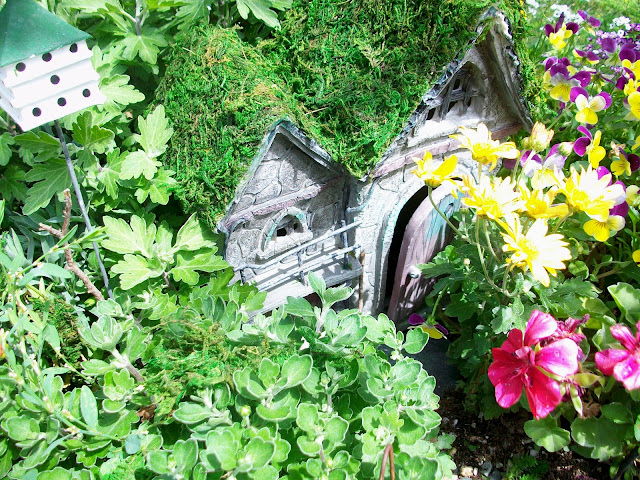 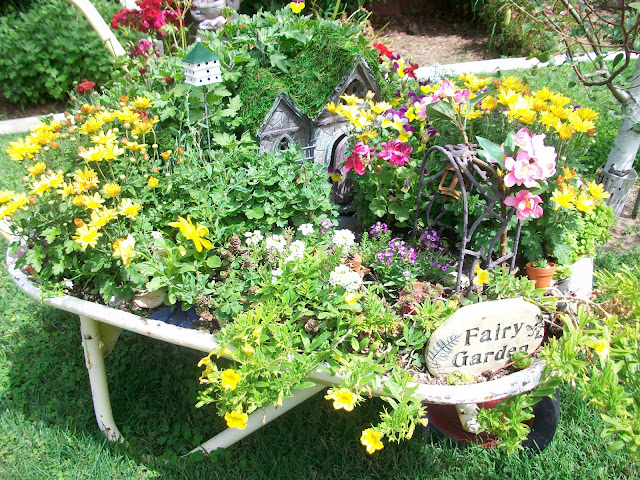 Do you see the lantern..it hanging haphazardly under the arbor..because I had lost the hook it had been hanging on in all that growth.  I'll look for it tomorrow.. 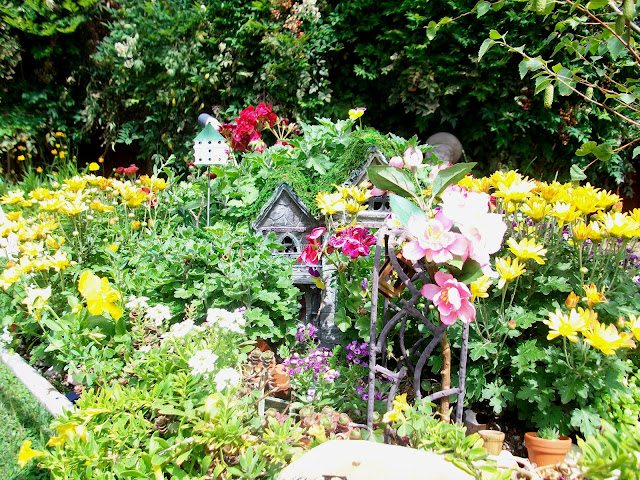 ﻿
Then when I took this picture and enlarged it...I SAW IT!  See that metal hook there through the greenery to the right of the little window...it's brown... YIPPEE!...so, I DON'T have to look for it tomorrow!
So I ran right out and retrieved it and hung the lantern back where it belonged.
I need to REMOVE the pink faux flowers on the arbor.  NO unreal flowers in our garden!  That's just plain ugly!!
Tomorrow...I'll do it tomorrow! 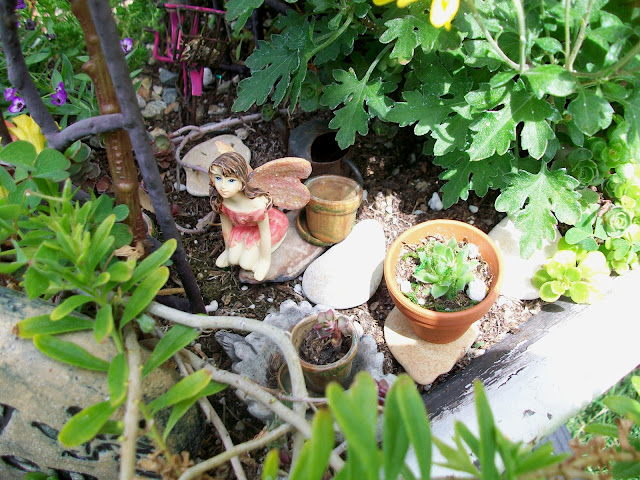 See all the gardening I have to catch up on?  The little stone path is all overgrown, the hen and chicks plant and all the other pots are all out of place..lots of work to do and that little Fairy there is NO help at all.  She just sits and looks at me helplessly.
She said she would help me..tomorrow..
And the kitty...Where is that kitty??
She better watch her tiny steps, because I've been shopping around..and there are some mighty pretty little Fairy's out there.  Would I do that??
(no..but she doesn't know it!) 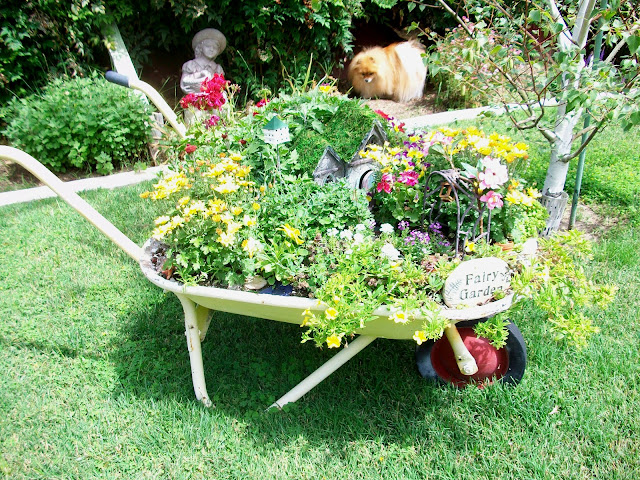 Yep..lots to be done still...and Mele's no help either!
Mele, get your little furry fanny over here and help me!
No,  don't tell me you'll do it tomorrow!  I NEVER put anything off until tomorrow!
I just LOVE it when I finally finish a project.  I really, really do!!
Lov'n hugs,
Mona
P.S.  The other Fairy Garden (Cockroach Haven?) is still sitting around the corner...waiting..waiting...for me to stop doing something I never, ever do.  Procrastinate.
OKLAHOMA!  Please put shelters in your schools!  Do NOT procrastinate!
LISTEN when HE speaks to us!
﻿
Posted by Wsprsweetly Of Cottages at 11:03 PM