Last week a dear friends daughter that I love very much and used to care for when she was a baby, called and said she would love to bring her two little girls over to see the house for Halloween.  I thought it was a wonderful idea and invited them for lunch.
Unfortunately something came up and they were unable to make it on that particular day...so we postponed until the following week and they promised to confirm.  When I heard nothing by the end of the week, Friday, I wrote and said that I supposed something had once again come up..and with many apologies my friends sweet daughter called me asked if she and her mother and the girls could come on Halloween day.  They had gotten really busy and had forgotten.
I told her I would check with my daughter as we usually planned something for that day but I would get back to her in a couple of hours, which I did.
We decided that they would come at 11 AM on Sunday, Halloween day.  So... 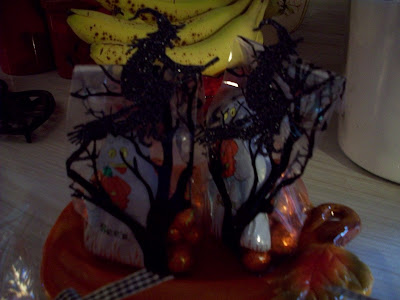 I found these adorable little Martha Steward treat bags complete with Witches.  I went to See's Candies and bought cute little ghosts and tiny pumpkins wrapped in orange foil and fixed up adorable little treats for each little girl. 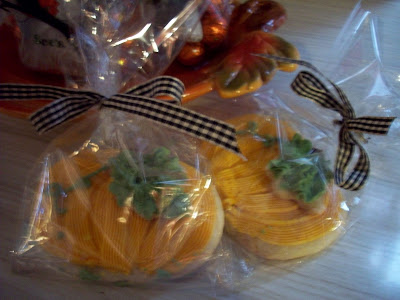 I had my daughter bake and package the big pumpkin cookies for them. 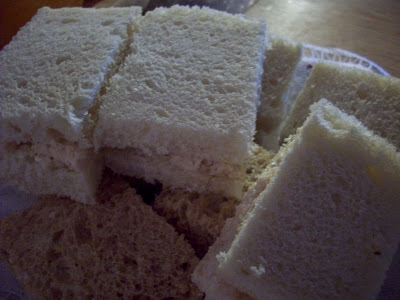 I made chicken and tuna salad sandwiches and put them on a pretty paper lace doily and made a nice potato salad to go with them.  Nothing formal...or dressy but I wanted it to be nice. 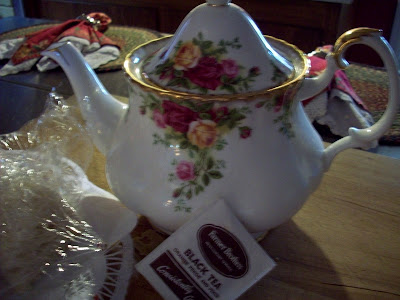 Then as the hour approached I put the water on to boil for the tea... 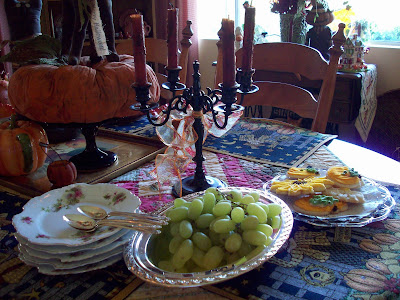 ...got out my pretty china plates, fresh fruit... 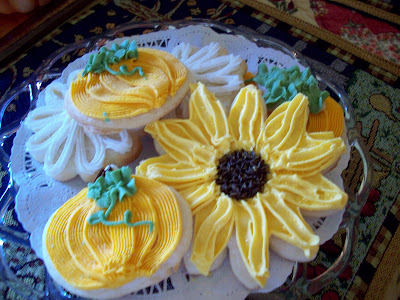 and added a plate of cookies for dessert to go with our ice cream.  My sweet son in law even drove across town to deliver them to me in time.
I had gotten up early and cleaned the house spic and span, laid out pretty guest towels.  Saturday had been hectic as Howard has not been at his best lately and not feeling too well.  I'd had to take him into the hospital at 4 AM and he seemed much better but I was running a bit behind so had to sort of rush around.
While the tea water was heating...I ran in and freshened up.  It was now about five minutes after 11.
I waited...and kept looking out the window.
You see, my friend had never met my husband yet or been to my home.  Her daughter had, so this was rather important to me.
The clock ticked...minutes passed and no one came.  And...I waited.  At 11:45 I ...decided to check my blog and my email to kill time.
Surprise!
There was a note from my friends daughter saying "I don't think we are going to make it over today.  I woke up with a terrible headache, (migraine) and I think I will stay in bed so I can take the girls out trick or treating tonight."  I'm so sorry."  The message was sent a couple of hours earlier.  She said she didn't call because she thought we might still be in bed!  Bless her heart!  I thought that was very thoughtful.
Lesson?  Check your email often?  Yes, but I have two phones.  A land line and a cell and they have both numbers but didn't think to call I guess.
So...Halloween was not the greatest day for me....however when Sweet Husband returned from his bike ride...he grinned and said "you mean I get to eat the sandwiches?"  THAT made me smile...sort of.
We had a nice lunch...and enjoyed every moment.  Sort of...
The reason I have all the photo's above is because I took them and sent them to my friends daughter so they could see I really tried to have nice lunch for them...and since they couldn't make it...at least they could see the photo's...and perhaps another time.  I said I felt bad the little ones didn't get the treats but that I would just give them to Howard Grandchildren even though they were too big for them really so they wouldn't go to waste...and that perhaps we could do it another time...
I just think in a case like that, it is always good to call.  NOT everyone reads their email all the time.  At least I don't.  Perhaps I should.
Technology is wonderful..but surely telephones are still important and very useful.
Should I have sent the photo's?  Probably not, now that I think about it because they called on the phone right away.  It seemed like a good idea at the time...
Lovn' hugs,
Mona
P.S. I took a long nap and felt better when I woke up.  Not quite so cranky! :)
Posted by Wsprsweetly Of Cottages at 2:21 AM