It was June 1952. The Korean war was happening. I was 15, and going to be a Junior in high school the following September. The school year was over in just a couple of weeks and I was looking forward to the summer. I was on my way to the school bus, rushing as it was nearly time for the buses to leave from the school..
Suddenly, I saw him. Some people have a word for what happened to me. I believe it is the Italians. I don't know the saying but it means to be "hit by a thunderbolt!" That is exactly what I felt. Like I had been electrically shocked. 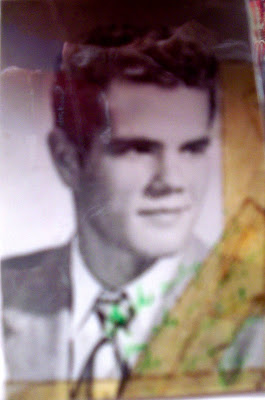 *The writing on this very old high school senior photo says "To the only girl in the world..and the sweetest. I love you.
Pat


I stopped dead! I didn't move! I didn't breath! The quad was deserted except for him and two cheerleaders from another school. He was holding his books, half sitting on a little wall chatting away with the girls. To this day I don't think I have ever seen a more beautiful boy. When I got myself together I casually walked on past to the line of school buses. I asked my friends who he was and within minutes they had managed to get him to the bus window. They dragged me, red faced, up from the floorboards and that is how I met Patrick. We all talked, or rather they did, but all I can remember is how he looked at me with those beautiful green eyes with the thickest lashes...

A few days later, my friends and I ran into him on the football field and someone wanted a picture of us together. Another moment of total embarrassment when he put his arm around my shoulders and leaned down and whispered sweetly into my ear..."some day we are going to be married and have seven kids!" To this fifteen year old...I couldn't believe he said that to me..and yet...
Now, you already know that his... whispered sweetly... promise of what was to come, came to pass if you have read my profile. Not to mention heartache beyond belief.
But, Christmas was coming...but it was to be a blue one. A very blue one...KOREA loomed..just as Afganistan does today.

The following day, he asked if he could talk to me..after lunch..and I said yes. He asked me out on graduation night. To dinner and a movie. He picked me up TWO hours late because his mother decided he could not use the car. However..she relented and we never made it to dinner but we did go to a drive in theatre to see "Lili" with Leslie Caron. We parked. He tipped my head back and kissed me and said "Will you marry me?" I said yes.

Now you also know where my name "Wsprsweetly" comes from.. *smile*

Hugs,
Mona
Posted by Wsprsweetly Of Cottages at 1:58 PM