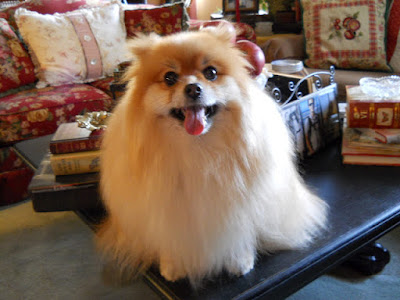 I will do the best I can to get through this post.   It's been so long since I have posted that I have sort of  forgotten now it's done...so this may or may not get finished.  Depends.

First of all..thank you so much to my dear blog friends that have contacted me and those who may have wondered what happened to me.
Partly I think "taking a little break" just ran into days and then into months.  Then tragedy began to happen to me.  I've already had a lot of loss, as you may know and I have picked myself up and went on after my little companion Mele died on September 7th.   I thought my heart was broken then...but I knew from experience that time would help...only time..

Then my daughters gave me another little dog for my 80th birthday in October and life went on.
He is a little boy and his name is "Buddy"...
Little did I know..my life would once again shatter and fall at my feet....worse.

On November 19th my first born child,  my son Patrick, died suddenly of a heart attack and a massive stroke that happened during the surgery.  My husband Pat, also died of a massive stroke and as in a nightmare I watched my son at nearly the same age as his father...linger for only two days and then made his transition.  He was never alone for one moment.  We stood vigil all night in shifts in ICU.and most of the time there was 22 of us by his side.  Then we knew that it was nearly over and softly each of us..one by one began singing Bob Dylan's "BLACKBIRD"  and then he let go and was gone. His sisters and brothers were so strong...all of my family was.  His wife..she is just lost right now.  I know exactly how she feels.  She lost her soul mate as I once lost mine.  We all clung together and sobbed...

The nurses never once said a word about the number of people in his cubicle...and brought us a cart of coffee and drinks.  From time to time someone would bring food...little was eaten.
My son is gone..and this is the second child I have lost in a very short time.  We are still healing from my first born daughter, Sandy.  Family flew in from Georgia, Colorado, San Francisco... Pat and Sandy were the "big brother and big sister" of my children.  Most of you know I have seven.  I will always say "I have seven children" until the day I die.

We are devastated!  So...this is what has happened to me.  This is the first time I have spoken in detail of it.  And as it is with Sandy, I see him everywhere..hear his voice saying "Hey Mom!"

This is a bad time for me.
I will be back perhaps...but maybe not.  I've been through death before but this...this is almost too much.  My life is upside down right now.  I cannot post a picture of my son.  It's way too soon.  I have written some of the details because some have inquired...it was sudden.  To dear friends who read my blog but don't blog themselves ...and I can't talk about it over and over..so this is what happened.
Again...thank you for inquiring after me..  It is so appreciated.
Love,
Mona

Posted by Wsprsweetly Of Cottages at 10:37 PM