~IS MY REPUTATION RUINED?~

Actually, if it wasn't ruined before...it will be this time!  But I am going to take a deep breath and just jump into the water...if it's icy.. :) I'll survive.
How's that for the "dramatic?"
So..
this is what happened.

This is Frank and I.  I was sixty five and he was seventy. 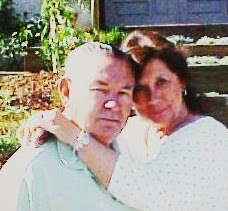 This is NOT a good picture of either of us..Frank was a nice looking man and this photo was horrible.  He looked cranky and the light hit him and washed out his features.  It's just a bad photo..but I can't find the photo's we took the day we got married.   Below is another one of the family toasting us at a reception we gave so the families could meet. 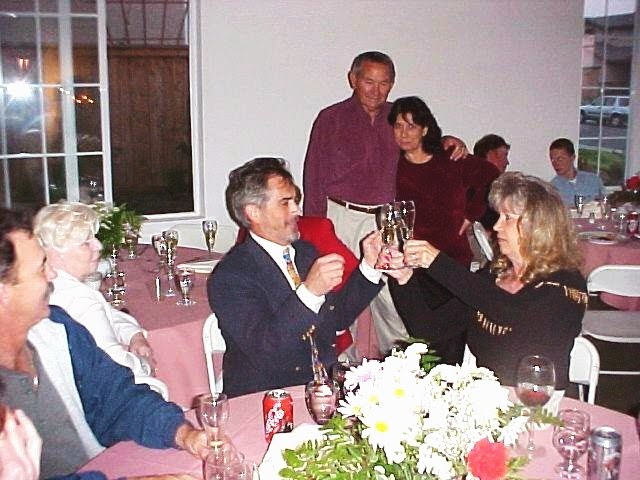 This is another bad picture.
In this picture my son is on the left and my sister on the right.  We are that tired pair in the background.
We had married in Las Vegas and had been busy getting this gathering together and we were both worn out.  I just wanted to sleep!

I do hope you are sitting down.
I met Frank on MATCH.COM  Indeed I did!!
We met for the first time online the day after Thanksgiving.. and
met in person on December 7th, 2001, and were married on New Years Eve just three weeks later.
See?  I knew you would be shocked~!!
So was I!  So were our children and that's putting it mildly!

He, like Howard, was one of the sweetest men I've ever met.  Strong, kind, funny.  He was an outdoors man.  The antlers you see on our walls now are from him.  He was a hunter and fisherman.
He branded cattle, rode horses, owned rifles and loved the outdoors...and I grew to love Frank dearly.
He had three great kids....all grown with families.

I had a wonderful life with Frank.  When we married he insisted that I retire..and at 65, I was ready.
We traveled, we went deep sea fishing, we fixed up the home he had bought shortly before his wife died..and he was like Howard in that he and I worked together on things on our home..planting a rose garden..tree's etc.
We had fun.

Match.com was my first experience on such a site and it worked.  The only thing I remember of what I wrote in my "bio" was "I love cute shoes and soft sweaters!"  The rest has left my memory.  Why I remember that I don't know, but looking back I would not have thought it would have appealed to a man.

We nearly didn't meet because I had put in the wrong address.   When I finally agreed to try match.com..I said I would give it three days.  My friend kept telling me "Well you aren't going to meet anyone by doing nothing.  Do you expect some nice man to just walk up and knock on your door??"  Of course she was right.  I had girlfriends and as dear as they were to me..I was lonely.  So, when the three days ended..and there was NOTHING,  not a single word,  I was so embarrassed that I went to Match.com  to cancel my page.
I almost hit the button to delete and then I suddely noticed it..the address had a type O!  We fixed it and left it for another day.  The following morning...I got the surprise of my life!  There were so many responses that I couldn't believe it.  I called my friend...and we had a great time reading them and decided to print some of the ones that were interesting.   The third one down was Frank, but he had no picture and lived very far away.  Still, there was something...so I answered his letter and he contacted me.  After a week he wanted to drive the three hours to meet me.  I agreed but I told him I thought that three hours away was too far.  He disagreed!  :)

We met for the first time on December 7, 2001 and were married on New Years eve..just three weeks later.
I know it was quick...but my instinct was right.  Just as it was 7 years later when I met Howard.
Frank and I were married for 6 years and on March 22, 2007,  I lost him to liver cancer.
I've blanked a lot of it out..and I know I seldom speak of Frank.  I know I had a hard time wrapping my mind around what had happened to him..and like Patrick..Frank was apparently healthy..then suddenly, in late January,  he came home with terrible pain in his left arm..I rushed him to the hospital.. He was gone from me by March 22.
Nedra, my best friend since high school, took a plane out from Arkansas and stayed a month with me.
I think I went a little mad.
I'd had enough of this life..my son was losing his kidneys..I was worried sick and I had to leave our home..and return to Riverside to be with my son, Dan.  Danny became my priority and it probably kept me sane.  I was needed by my son.

Isn't it amazing what you can survive?  And this is nothing to what some folks go through.

It seems I'm not the type to let life beat me..and I won't let it beat those I love.  I needed to be with my son.
The children all came..my Sandy took a plane immediately from Georgia..and all four girls came.
Eventually everyone returned home and I was alone in a town far from home..so I packed up and another dear friend, Ann, took a bus to be with me and helped me move back  home to Riverside..
and here I met Howard...and eventually began to live again..

I've written a book here ..and just think what it would have been if I had put ALL the details down.
Suffice to say..you can survive anything if you give life a chance.
There have been times, I've wanted to just give up.
I still cry, sometimes too much...but I have Howard to make me smile...and my precious family and the dearest friends in the world.
Someone always walks beside you..you are never alone.  I thought I was when Patrick died..but I was not.
It's Patrick who walks beside me and makes me carry on.
Love,
Mona
Posted by Wsprsweetly Of Cottages at 9:55 PM