~THE WALLPAPER HANGER...you want one with EXPERIENCE.~

Lots and lots of it!
Well..I have to say he has done a good job so far.  Bless his heart.  I don't know who to feel sorrier for..him or myself.
You see, Duane, that's his name, is 80 years old.  He is just the nicest man you would ever want to meet. 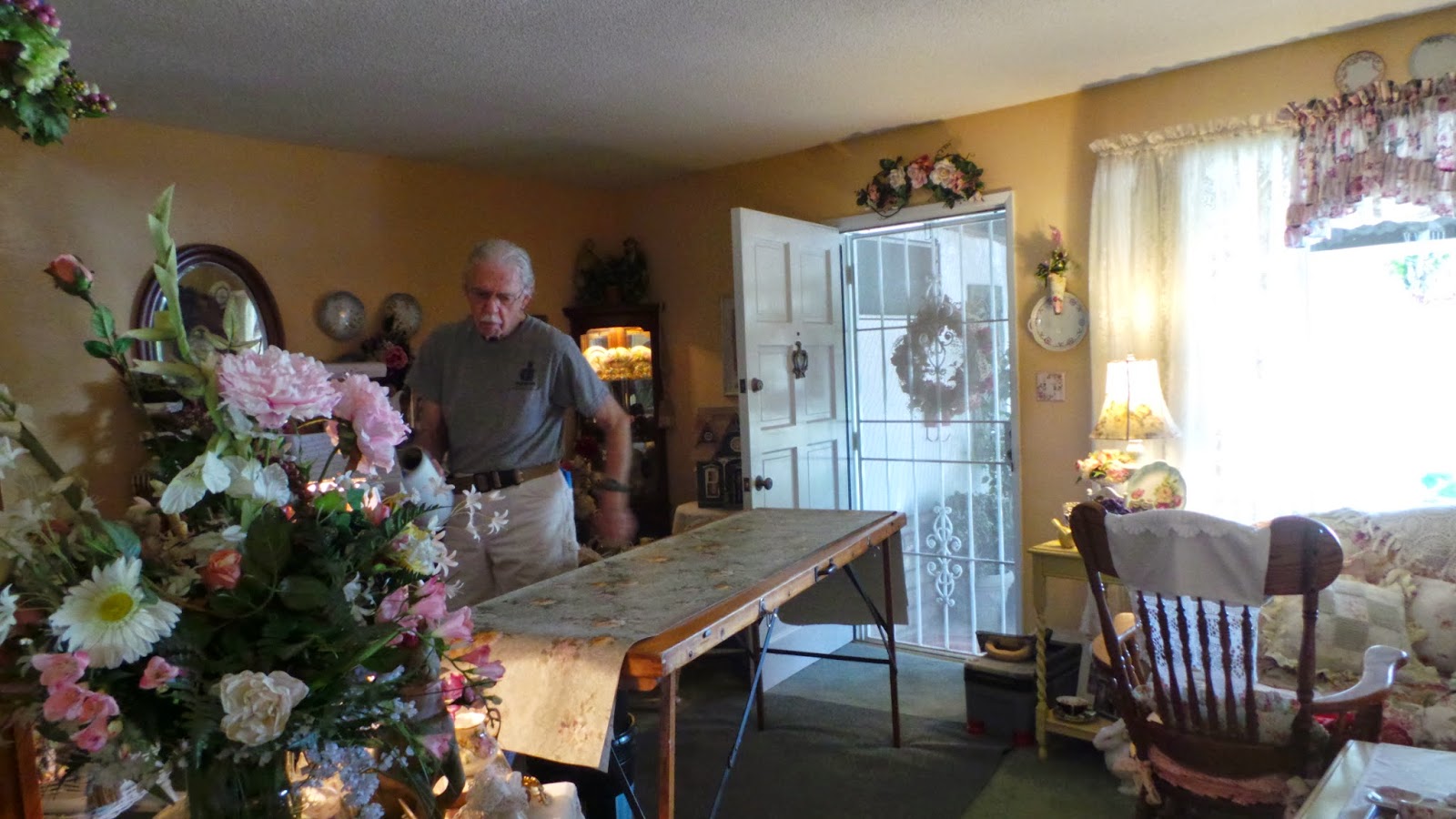 This is Duane.. setting up to wallpaper the little hall. 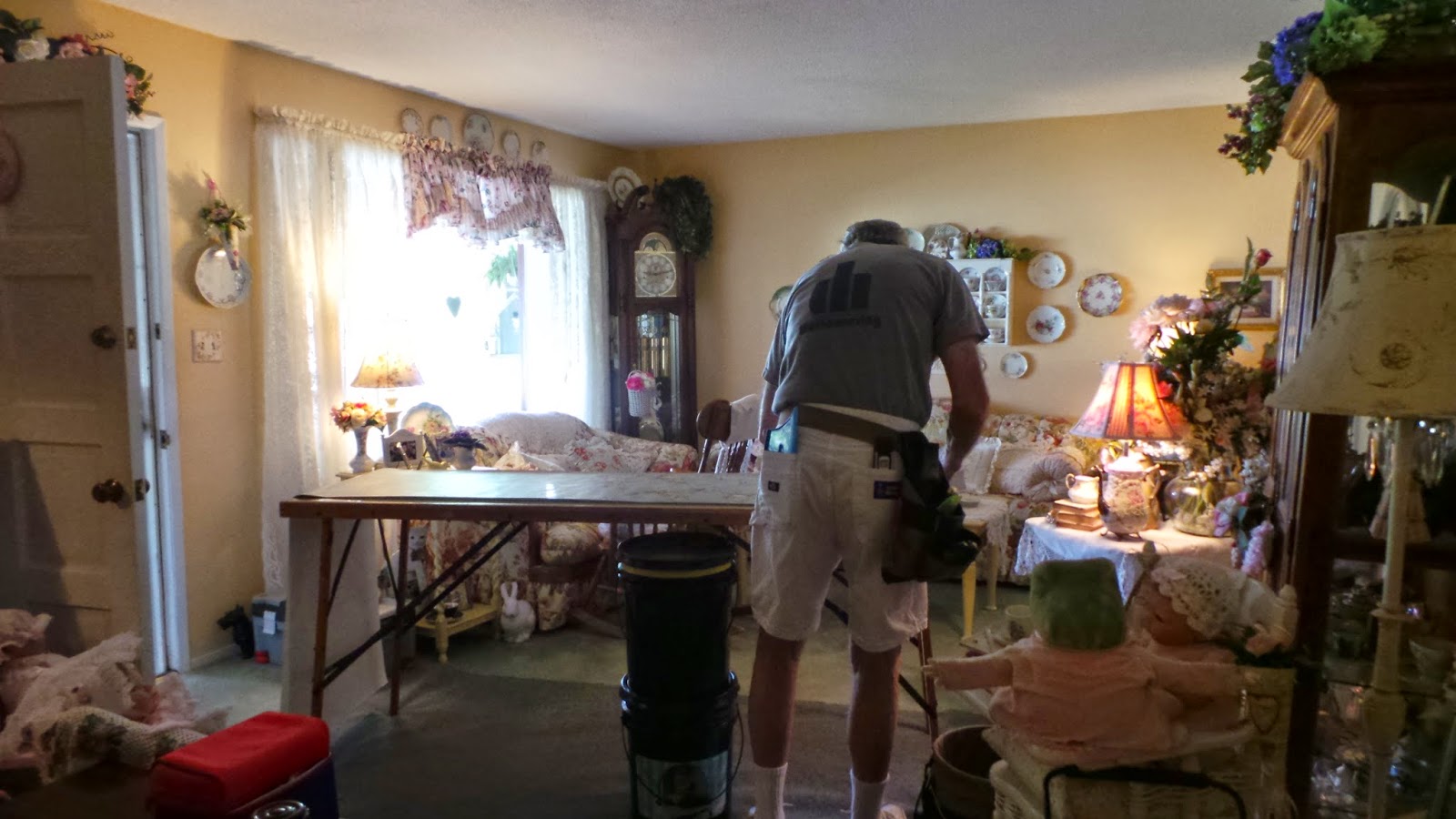 This is our dear Duane all set up and working away.  So darned nice!  Good at wallpapering too. 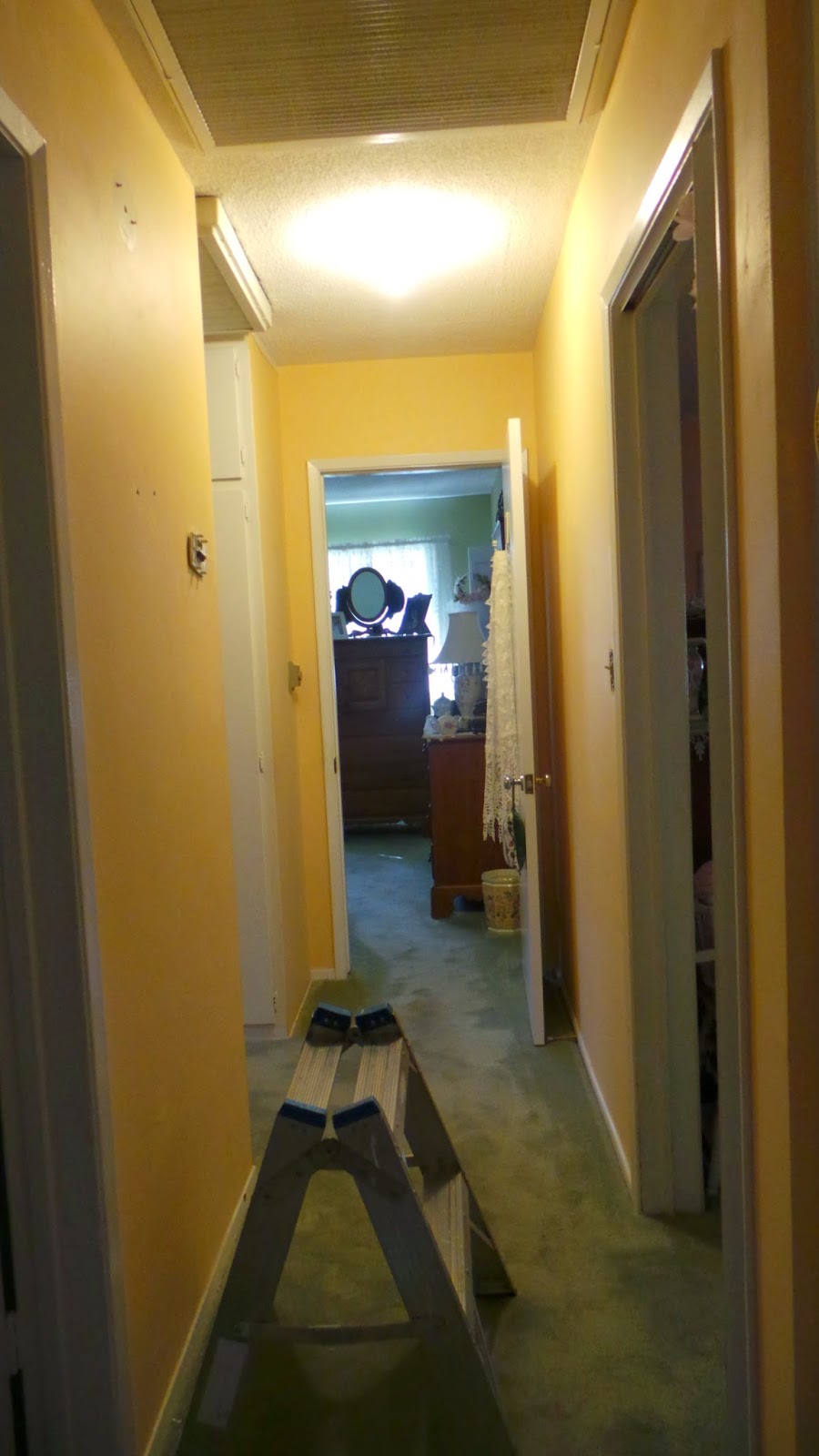 This is the before picture of the hallway to be papered. 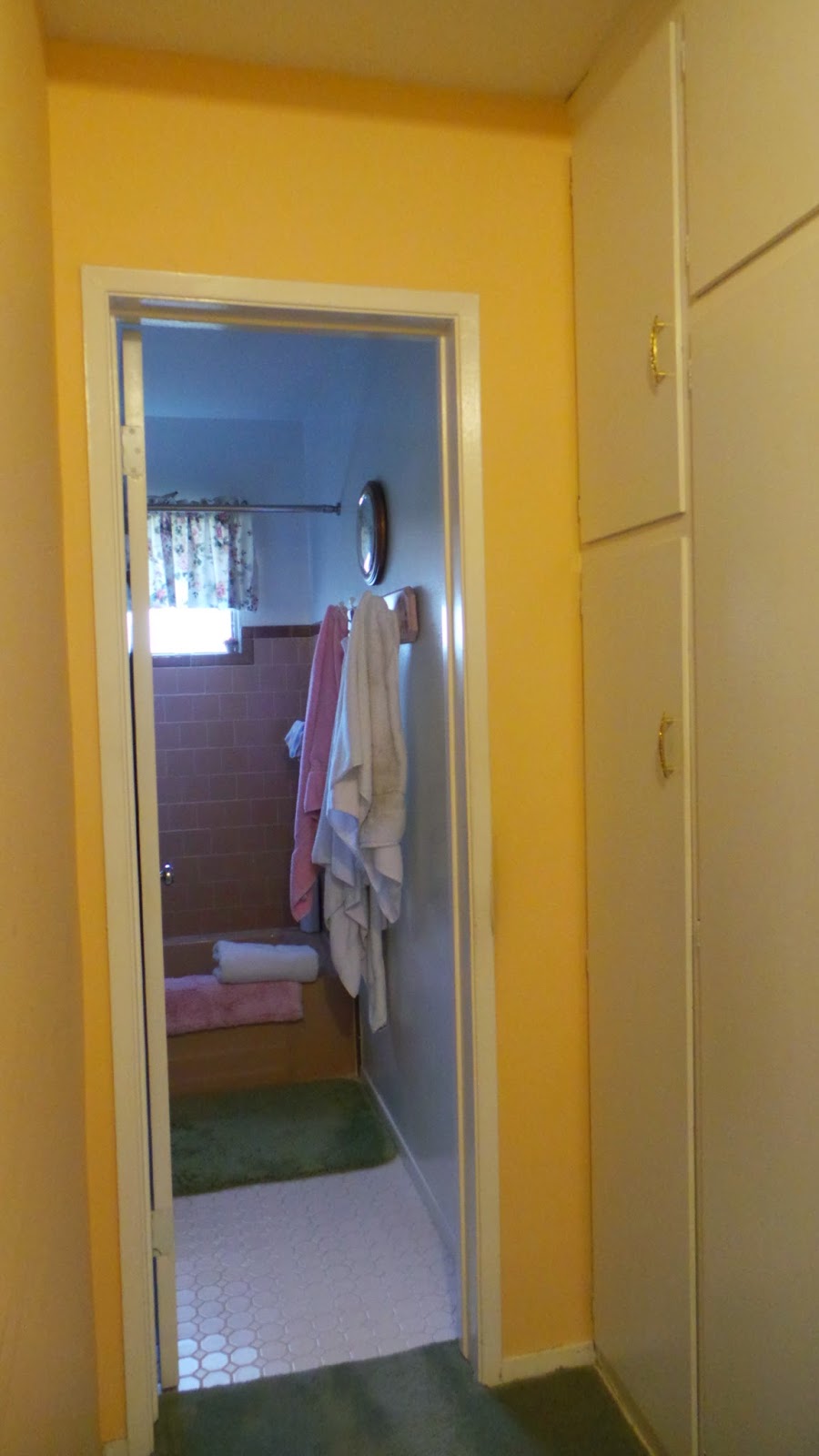 This is another view, the T of the hallway..
It looks a bright yellow but the hall light was on and ..made it look really, really, REALLY YELLOW! 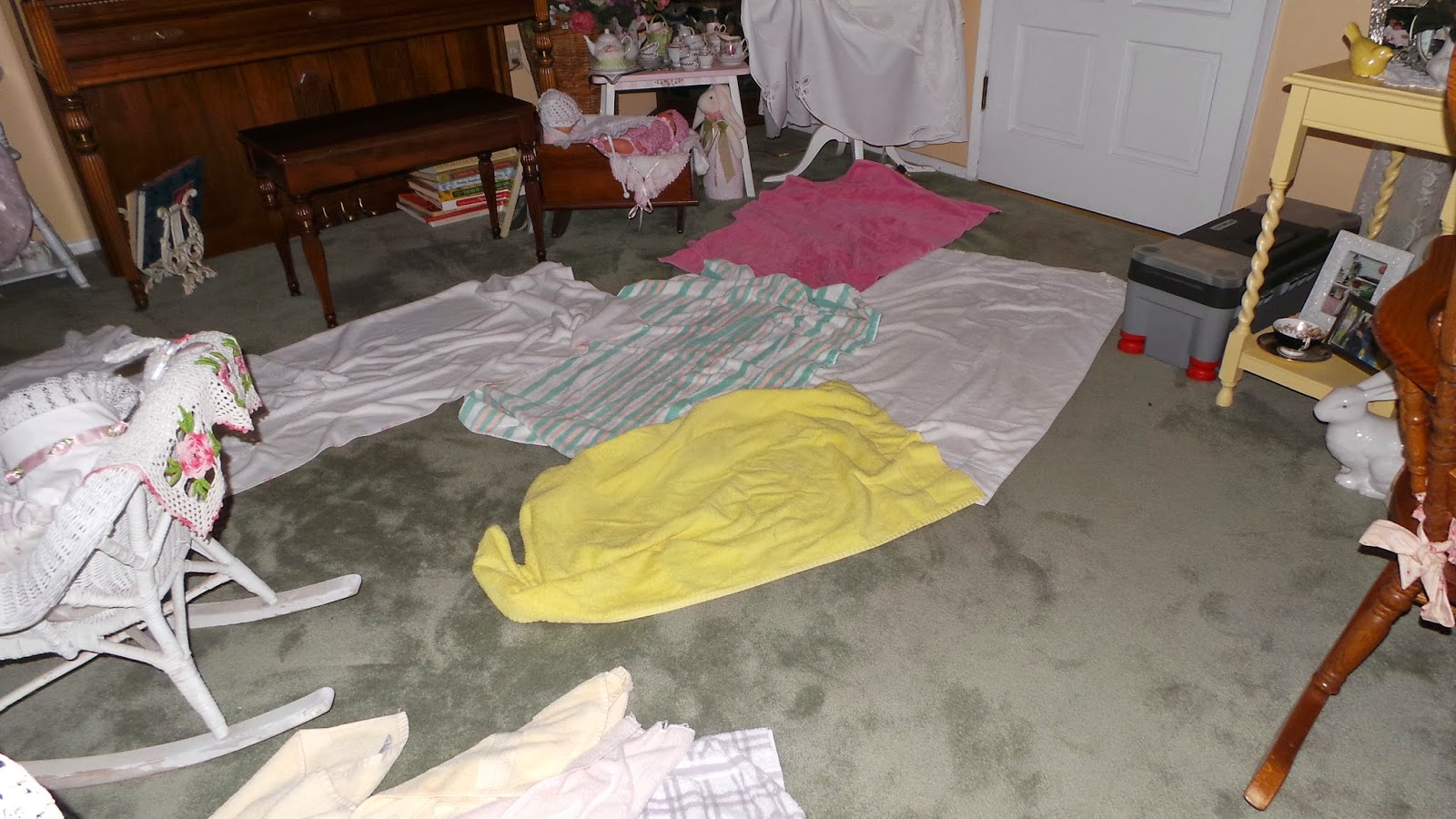 To make a long story short..Duane began the job at 8:30..
By 2:00 the man was TIRED and said he had to stop.  I agreed.  He had kicked over a five gallon can of wallpaper glue on our new carpet....I told him not to worry..I would clean it up.  I am after all two years younger than he is!  Nope, not to worry..(worry, worry, worry)
By the time he was all packed up to leave and would  come back in the morning..it was already getting stiff.  We had gotten as much out as we could by scooping it up in a dustpan and I used tons of small towels in clear water to scrub it.  I thought he was going to have a heart attack.  I thought I was going to have one too!

Finally he left and I got out the shop vac..some warm water and added a bit of fabric softener..and went to work.  I did the best I could and kept changing the bath towels the rest of the day.  I have a stack of old towels I keep all clean in the garage for emergencies ...however...
I really am kind of worried... :(  You know, as in anxious?)
It never rains but it pours!
Love,
Mona

P.S. AND did it ever rain in Southern California today!  HAIL!!  It thundered and thundered and then it hit..  Hail in August??  Indeed it did! :)
...but again..in the scheme of things if you watch the news...this is NOTHING!
That poor Journalist...and then the terrible problems with the shootings.