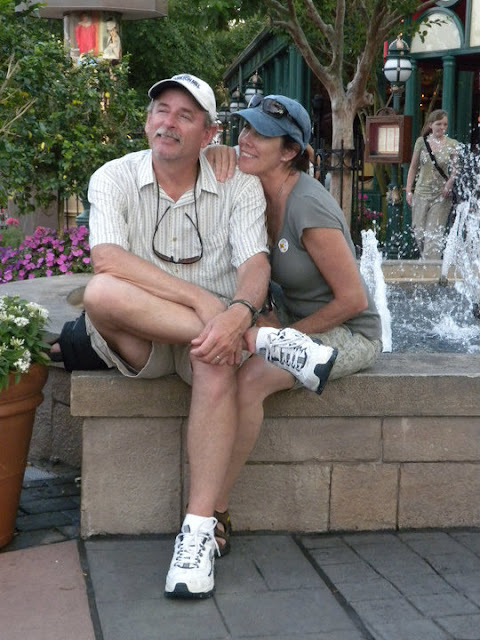 My precious Sandy and the love of her life, Jeff.  They were married for 37 years.
Some of you know that I lost my precious daughter, Sandy, not long ago.  It's another chapter to "Going Home" really.
I have a new great granddaughter that was born just a few weeks after my Sandy's death.
It would have been Sandy's fourth grandchild..and she was anticipating the birth so much..
I have not seen baby Ruby, but I want to go so bad.
The idea of going back to my daughter's home is so hurtful.  I will go.  I know I will, and I feel so bad that I am dreading it.  Sandy won't be at the airport to meet me as she always was.  She was always such a joy to be with, so many hugs...and she was always so proud of her children, grandchildren and her childhood sweetheart, Jeff.  She was busy fixing up her dream home and loved showing us new things she had done and sharing her plans..
Even though I have known Jeff, since his teen years and his skateboard days when he was one of the neighbohood children that lived just around the corner from us, still I dread it.  I want to see him and I know he needs us to stay close to him, and we need him..  I am trying to get past my own pain.   I have already been through it once, getting off the plane and my daughter not being there and the realization that she never would again..and it hurt so badly.
When Jeff took us to the airport to return to California, he gave me a hug, looked down at me and said "you won't come back"
"I WILL, I WILL!" I said.  "No..you won't.  I know you won't!"   It was something I hadn't really thought about yet, but I could tell immediatly that he had.   "Jeff, you are my family, honey..and my grandchildren are here and my little great grandchildren.  Of COURSE I will come back!" I said.    But somehow, I think he knew it would end up being very difficult for me.  For all of us.  Of course it would be...and he already knew.  After we parted and my daughter and I boarded the plane, I couldn't stop crying.  My poor dear son in law.  He was in such pain and trying to hide it.
I think of what he is going through now, what he will continue to go through for some time to come...and it hurts me.  I KNOW how he feels.  I 've been there.  The world keeps on turning and YOUR world has stopped!  His childhood sweetheart is gone..she lives in his memory..and he spends a lot of time looking at her pictures on the computer and trying to hang on to her. He is trying to keep her with him.  Sandy was a shutterbug and took thousands of pictures.   When Sandy's father, Patrick died, I did the same thing.   I tried to hang onto him.  I would get in the closet and wrap myself in his clothes..and cry.  I bought things for him.  A desk, a paper shredder, all the things he had wanted.  For nearly four years I lived like that.
I NEED to go home..to my daughters home.  She would want me to.
My love to you,
Mona
I'm sorry this is not an uplifting post.   My family and I are going through a process... I don't usually talk about this..but it's what is on my mind.  What I live with every day.
﻿
Posted by Wsprsweetly Of Cottages at 2:13 PM