Tired of construction?  Not half as tired as we are!

We had a bit of an incident yesterday.  Just one of those things that happen when you are trying to keep up with a bunch of constructions workers.
You see...we came up short on beams, because I suddenly noticed (idiot me) that two of the beams were rotted and needed to be replaced...so...off they went to the lumber yard to get two more.
It was late.
The two extra's would need to be primed and painted with two coats of brown before the carpenter came in the morning.
Early the next morning..we were up bright and early to get started.  We set up the sawhorses, Howard and I managed to carry those large beams out to be painted...and Howard went to work.  I went back in side to make coffee and start my day.
Suddenly (and this happens to me fairly often) while working on the computer and drinking my first cup of coffee of the day..I had a vision.  Yes.  I did.  I had a vision of Howard painting the beams RED!
If you look below you will see BROWN beams!  Chocolate Brownie brown, by Frazee.
I thought to myself, "that cannot be true.  How silly!  He would never paint the beams RED!" and I went back to my work and my coffee.
WRONG! 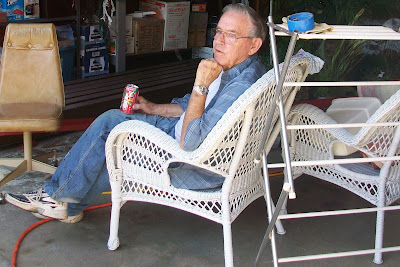 I was in the gargage starting my washing.  Sweetie Pie comes in and says, "Um..I did something and I'm not sure if I should tell you."  I said (forgetting my vision of earlier), "..well if it's bad, don't tell me because I'm having a really nice day!"  He looked at the garage floor and said softly... "I painted the beams red!"
My poor baby!  I felt so bad for him!
Later.  The dust had settled.  He had a rather dazed look on his face (as you can see in the photo above) but the beams are now brown.
I did notice that when they were finally installed...they had a bit of a ...red cast?  LOL
Oh well...the porch has a roof!﻿
I would give details...but I'm sure you can pretty much imagine ..basically, I pointed,  he rolled paint.
All's well that ends well.  Right?  Right? :)
Hugs,
Mona
Posted by Wsprsweetly Of Cottages at 9:58 AM