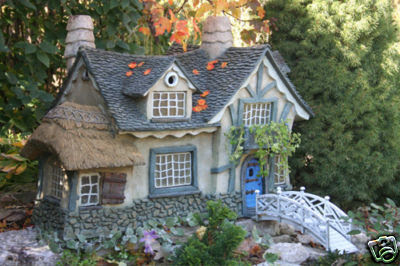 I thought this little Fairy cottage was so sweet.
I was raised with an Irish Grandfather and Grandmother and tales of Fairies in Ireland. When my two oldest sons, Patrick and Michael and their wifes returned from two weeks in Ireland and brought me beautiful Irish lace and a VERY old green marble egg. They also brought lots of footage of themselves and their travels through Ireland.
They told me they only had a "wee bit of the good ale" but..from the footage..they proved themseves to be as Irish as their Pop. Those mugs looked good size to me but they said it was an insult to the establishment if they didn't down a quart right off. Do I believe that. Oh..well...probably. I'm gullible. Sounds like a buncha Irish tommyrot to me though. :)
My poor babes are Irish on both sides. Their Dad was all Irish and I am half. All seven have their fathers and my green eyes and dark hair. (Shhhhhh...we won't mention the pic. below!) They all have tempers, but hearts of gold and generous to a fault, AND they all tell a good story. An Irish trait for certain!
Anyway...I just felt like talking about my children a bit.
Posted by Wsprsweetly Of Cottages at 2:00 PM

Labels: ~you can buy these cottages for your yard :)~